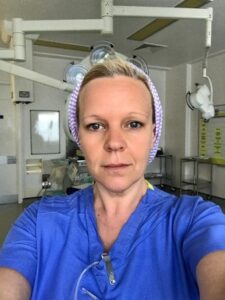 Friday, May 14 is National ODP Day. Here, Trust colleague Lisa Howson writes a guest article on what she and her colleagues do and why their role is vital to the care of patients often at their most vulnerable time.

You’re a what? You work in Outpatients? No, never heard of it! They’re the most common responses we get when asked who we are and what we do. Historically we have also been known as Technicians, ODAs and even Box Boys way back when. So what is an ODP?

ODP stands for Operating Department Practitioner and if you’ve ever had an Operation, a General Anaesthetic, a Caesarean section or any anaesthetic intervention the likelihood is that you have been treated by an ODP.

The two best ways I have heard of us being described are; we are the Mutley to the Anaesthetists Dastardly and my particular favourite, we are the SAS of the NHS, we come in, do our job and no one ever knows we were there.

Our basic level training is three years at degree level, coming out with the equivalent level of qualification as a trained nurse. We are qualified and practise in all aspects of theatre based perioperative care. Anaesthetics/Airway Management, assisting with inter-operative surgical care and in the post anaesthetic care unit during the recovery stage of your operation. We are your eyes and ears while you’re with us.

Members of the ODP profession have been registered with the Health and Care Professions Council since 2004, but we have not formally been classified as allied health professionals, or AHPs, until more recently.

Although as ODPS we have always predominantly been based in the theatre, hence the name, you will also see us pop up in various other areas of the hospital, A&E, Resus, MRI/CT, Maternity or even in the back of an ambulance. Wherever an anaesthetist may be required you will often find an ODP not far behind (sometimes even in front).

Due to the development of the role of the ODP over the years, as well as the traditional theatre based ‘anaesthetic assistant’, here at Blackpool Teaching Hospitals we now have members of our profession undertaking roles in theatre management, as members of the Resuscitation Department, we have Physicians Assistants, Surgical First Assistants as well as ODPs based in Surgical High Care at ward based level.

During the COVID-19 pandemic, as elective surgery slowed down many ODPs stepped up. We fast became vital members of our critical care team, stepping out of our comfort zone and throwing ourselves into an area we have never been based in before at patient care level.

We took our transferable airway skills, had a very basic orientation, there wasn’t the time nor the staff for anything more, and got stuck in. We learnt new skills, developed new relationships and on a personal level experienced a wave of emotions I hope never to have to endure again.

As a result of this, some ODPs are still working within the critical care department on an ad hoc basis and are hoping that the role of critical care practitioner, based within ITU/HDU, will now be something that is offered to ODPs here at Blackpool Teaching Hospitals on a more permanent basis in the not too distant future. Who knows where else we’ll get to after that?

We are striving for more recognition and more awareness of the role of the ODP as AHPs both within the hospital environment as well as becoming better known amongst the general public.

So if you see us out and about, doing what we do, come and have a chat if you’re curious, we’re a friendly bunch and only too happy to promote our role.