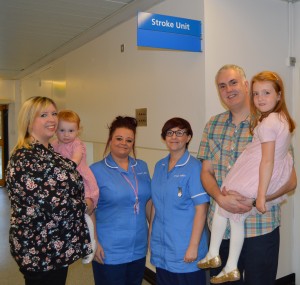 A girl who suffered a stroke when she was just four-years-old has enjoyed a trip of a lifetime thanks to caring nurses from Blackpool.

The nurses from Blackpool Victoria Hospital arranged for Eilidh Bilsland from Kilmacolm near Glasgow to visit the resort and turn on the illuminations after hearing about her plight.

Kerryann Eva, who works as a nurse on the hospital’s Stroke Unit, got to know Eilidh’s mum Emma through an online support group for expectant mums two years ago. When Kerryann’s twins, Samuel and Jasmine, were born at the same time as Eilidh’s sister Anna the two mums were delighted and gave each other mutual support.

But in March 2015 Kerryann was shocked to hear that five-year-old Eilidh had suffered a stroke due to a brain haemorrhage. Thankfully Eilidh received excellent treatment at the Royal Hospital for Sick Children in Yorkhill, Glasgow, and is recovering well.

However, Emma was deeply traumatised by her daughter’s illness so Kerryann and her friends and colleagues on the Stroke Unit decided to do something special for the family.

Kerryann said: “It broke my heart to hear about Eilidh. It was also heart-breaking to hear how frightened Emma was.

“After speaking with a few other nurses we decided it would be nice to invite Eilidh and her family for a holiday in Blackpool to take their minds off things and give them a bit of enjoyment. I knew that Eilidh had been to Blackpool before but she had never seen the illuminations so we thought it would be nice for her to come.”

Emma said: “Eilidh couldn’t believe how amazing it was. We did it at the tableaus on the promenade. They did a countdown and Eilidh switched on the lights. It was wonderful. She was so ill only months ago so for her to be well and lighting the lights was unbelievable.”

“We can’t thank everyone enough for what they have done. We have been amazed by their kindness. They have been so lovely. It’s something we will never forget.”