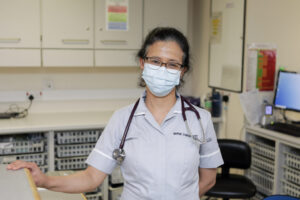 A specialist Nurse Consultant with a background advising on cutting-edge international health programmes has joined the team at Blackpool Victoria Hospital’s Haematology department.

Mylene Freires steps up from a role where she spent three years as the first Advanced Nurse Practitioner (ANP) to be recruited to the hospital’s Haematology department.

Prior to that she was the first ever Advanced Clinical Practitioner for Haematology in Qatar, where she worked for more than three years during the implementation phase of Qatar’s Cancer Transformation Programme. She played a critical role in the establishment of the country’s stem cell transplant programme and was responsible for mentoring, training and developing haematology nurses.

Mylene’s Nurse Consultant role is both a leadership and clinical role. Currently her priority is to develop the chemotherapy service for haematology, looking for innovative ways to deliver care and patient experiences.

She also oversees the clinical practice of haematology ANPs and trainees in Blackpool and Preston.

Mylene, who holds three Masters degrees and speaks three languages, said: “It’s an exciting time for me and for the Trust. As this is the first role of its type I am sure the role and its scope of practice will change in the months and years to come. I am keen to make sure it remains relevant – making a difference and being responsive to the needs of patients, staff and the service.

“I am also keen to encourage nurses, particularly my BAME colleagues, that staying in a clinical role as a career choice is a good option. I want share the knowledge and skills I have built up not only to help patients but also nurses through role-modelling, informal and formal teaching and clinical supervision.”

The Nurse Consultant role is the highest in terms of career progression that any nurse choosing to stay in a clinical role can reach.

Mylene, who was a recipient of the Stars of Excellence Award in 2015, in Qatar, and the Mary Seacole Award in 2010-2011 (a national NHS Employers and Department of Health award) is one of the few Nurse Consultants working within the Trust.

Her career has also seen her work closely with several international health organisations in the US, Canada and UK to raise nursing standards and on several quality improvement projects. Mylene was also the first haematology ANP at Guy and St Thomas’ NHS Foundation Trust in London.

Blackpool Victoria Hospital’s Haematology department care for patients with conditions such as leukaemia, lymphoma, bleeding disorders and stem cell transplantation. It operates a day unit, clinics and the haematology ward.