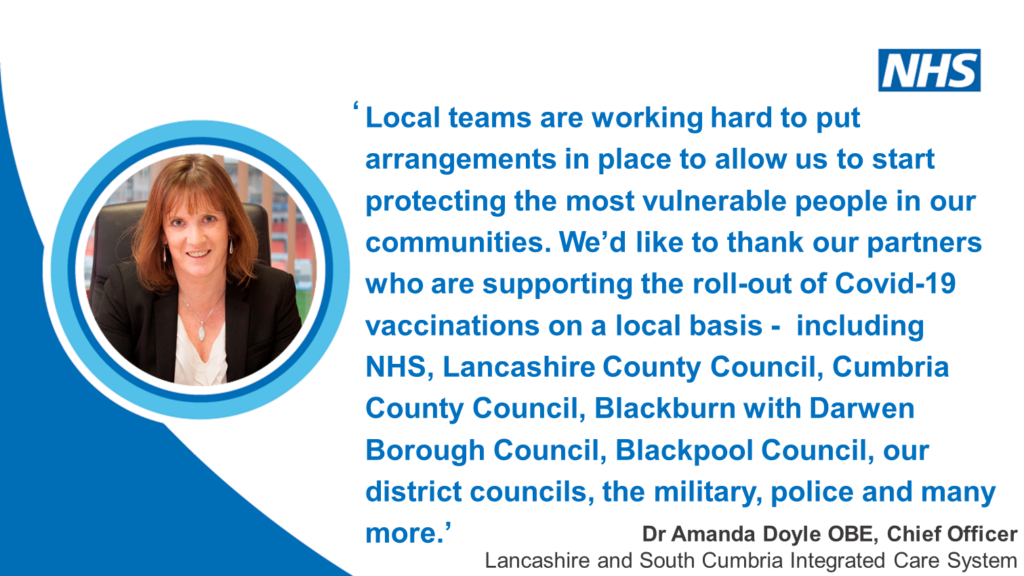 NHS chief Sir Simon Stevens has today praised the efforts of hardworking staff for making the roll out of a Covid-19 vaccine possible, saying that the deployment marks a “decisive turning point” in the battle against the pandemic.

The NHS in England will begin the biggest and most highly anticipated immunisation campaign in history at 50 hospital hubs this week, with more starting vaccinations over the coming weeks and months as the programme ramps up.

Since the Pfizer vaccine got the green light from regulators last week, health service staff have been working around the clock to manage the huge scale logistical challenge of deploying the vaccine.

Dr Amanda Doyle OBE, Chief Officer for Lancashire and South Cumbria Integrated Care System, said:
“Local teams are working hard to put arrangements in place to allow us to start protecting the most vulnerable people in our communities. Being prepared for a vaccine involves a wide range of organisations. We’d like to thank our partners who are supporting this on a local basis including NHS, Lancashire County Council, Cumbria County Council, Blackburn with Darwen Borough Council, Blackpool Council, our district councils, the military, police and many more.”

Sir Simon Stevens, NHS chief executive, said:
“Coronavirus is the greatest health challenge in NHS history, taking loved ones from us and disrupting every part of our lives.

“Hospitals have now cared for more than 190,000 seriously ill Covid-19 patients and have seen beds fill up again in recent weeks.

“The deployment of this vaccine marks a decisive turning point in the battle with the pandemic. NHS vaccination programmes which have successfully helped overcome tuberculosis, polio, and smallpox, now turn their focus to coronavirus.

“NHS staff are proud to be leading the way as the first health service in the world to begin vaccination with this Covid jab.”

People aged 80 and over as well as care home workers will be first to receive the jab this week, along with NHS workers who are at higher risk.

Over the weekend, hospitals have begun inviting over 80s in for a jab and work with care home providers to book their staff in to vaccination clinics.

Hari Shukla, 87, from Tyne and Wear will become one of the first people in the world to get the Covid vaccine at hospital in Newcastle on Tuesday.

Any appointments not used for these most at-risk groups will be used for healthcare workers who are at highest risk of serious illness from covid. All those vaccinated will need a booster jab 21 days later.

NHS national medical director, Professor Stephen Powis has warned that the roll out of a vaccine will be a marathon not a sprint.

The Pfizer vaccine needs to be stored at -70C before being thawed out and can only be moved four times within that cold chain before being used.

GPs and other primary care staff have also been put on standby to start delivering the jab. A number of GP-led primary care networks will begin doing so next week with more practices in more parts of the country joining in on a phased basis during December.

Vaccination centres treating large numbers of patients in sporting venues and conference centres will subsequently stand up when further supplies of vaccine come on stream.

Being the first health system in the World to deliver a vaccine is the latest in a long line of “firsts” for the NHS, which has led the world in numerous innovations including: