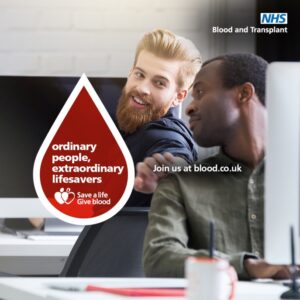 There is a vital need for young men across the Fylde coast to start donating blood because of a serious gender imbalance in new donors nationally.

During 2019, new statistics show that for every 100 women who started giving blood, only 70 men did the same.

Only 41% of new donors were men last year.

This is a concern because men have higher iron levels, and only men’s blood can be used for some transfusions and products. Without more men starting to give blood, blood stocks will come under increasing pressure in future years.

NHS Blood and Transplant now has a 22% increase in the target number of new, first time male donors it needs this year, to getter a better balance for the long term..

Throughout January, NHSBT is running a national campaign about ordinary men becoming extraordinary by donating blood, by highlighting the unusual ways their blood can be used.

Firstly, they have higher iron levels, so they’re also less likely to be deferred for low haemoglobin. That is crucial for helping to maintaining a strong donor base, especially for patients who receive many hundreds or thousands of transfusions over their lifetime.

Secondly, women can produce antibodies during pregnancy, even during short pregnancies they don’t even knew about. Antibodies are part of the body’s defence system and they make transfusions more difficult. This means only men’s blood is used for some specialist transfusions and blood products.

Mike Stredder, the head of donor recruitment for NHS Blood and Transplant, said: “All our donors are amazing. But we need more than 65,000 men to start donating blood this year.

“Men’s blood can be used in extraordinary, lifesaving ways, but we don’t have enough new male donors coming forward. This is not about recruiting as many donors as possible – it’s about getting the right gender mix. We are focusing the campaign on our donor centres, where there is more capacity for new donors.”

NHSBT thinks the recent gender imbalance in new donors is due to combination of factors. A recent research survey (5) indicates men are less likely than women to think that donation will make a difference.