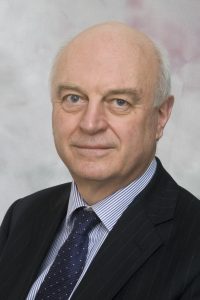 Ian, who took over the role from Beverly Lester in April 2012, has overseen many significant achievements in his time including the transfer of community services, the new main entrance and new car park at Blackpool Victoria Hospital, improving our performance across a wide range of areas, and leading the Trust through significant periods of change.

He is expected to take over his new role within the next couple of months.

Ian said: “I would like to thank staff, Board colleagues and Governors for their support over the past six years.  I can honestly say that it has been a privilege to serve as Chair of a forward-looking Trust which has placed patient care at the very centre of its focus.

“These are challenging times for the NHS but I believe that the Trust’s Strategy and its involvement in the wider Fylde Coast initiative on health and care will continue under the leadership of the Chief Executive and the Board.”

Wendy Swift, Chief Executive of Blackpool Teaching Hospitals NHS Foundation Trust, said: “On behalf of the Board of Directors and all our staff I would like to congratulate Ian on his appointment and thank him for all of his hard work over the years and wish him every success for the future.

“Ian has played a major role in the Trust’s development over the past few years and been a great advocate for the patient and a great supporter of our staff.’’