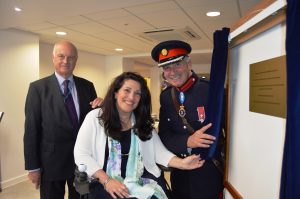 Patients at Blackpool Victoria Hospital are benefiting from a new £408,000 outpatients area after it was officially opened.

The new development was given the green light after Blue Skies Hospitals Fund allocated £200,000 to the project, made possible thanks to generous donations to the Trust charity and was opened on Wednesday, September 28, by the High Sheriff of Lancashire, John Barnett MBE DL and his wife Danielle alongside Ian Johnson, Chairman of Blackpool Teaching Hospitals.

Performing the official opening, Mr Barnett said: “Danielle and I are immensely proud to be here in our local hospital seeing the wonderful innovations that are taking place.

“This is a wonderful place for patients to come and they will feel more relaxed in this modern, open space.

“It was 25 years ago that Danielle and I had a conversation with Les Dawson about the hospital’s scanner appeal and we promised him then that we would support all the hospital’s appeals and that is what we have done over the past those years. 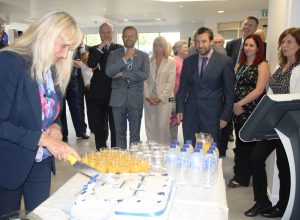 “We have been involved with such appeals as the Macmillan Windmill Appeal when Danielle was invited to cut the first sod. It is a wonderful honour to still be involved with the hospital and we are so proud of you all.’’

Wendy Swift, Chief Executive (Interim), said: “This is really fantastic, so many staff and volunteers have been involved in this project and I want to say a big thank you to everyone who made it possible.

“Our Blue Skies Hospitals Fund has really supported it and this is a success because everyone has worked together.

“This has been a fantastic partnership achievement.’’

Doug Garrett, Chairman of Blue Skies’ Charitable Funds Committee, said: “Blue Skies has been able to make this large contribution to the outpatients development thanks to an extremely generous legacy which has been left to the charity.

“This scheme just proves how important the charity is to the Trust’s work, and how all donations from Blue Skies are used purely to benefit patients and to make their visit to hospital as stress-free as possible.’’

Chairman, Ian Johnson, linked the opening to the 80th anniversary of Blackpool Victoria Hospital, added: “It is a special day today, being our 80th birthday and opening a new Outpatient centre.

“While 80 may be the new 60, there is nothing elderly or frail about this institution which is so forward thinking in its care for patients.’’ 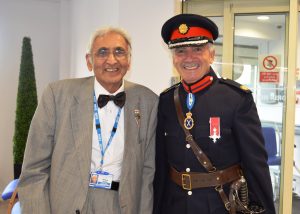 The Trust’s patients panel members were also praised for their role in the development of the area.

In a unique partnership members of the panel were involved in the new building from its initial concept to its final design, coming up with some excellent ideas such as how high desks should be and how many wheelchair spaces should be allocated in the clinics.