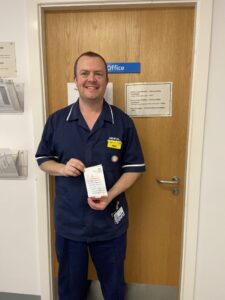 Neil Berrigan, Clinical Skills Facilitator at Blackpool Victoria Hospital, has won a Going The Extra Mile Award after being nominated by his colleagues.

Neil, based in the Skills and Simulation team on the second floor of Blackpool Victoria Hospital, helps facilitate the rolling programme of training for clinical staff.

Staff from across the Trust access the training sessions, such as on how to take blood from a patient, and Neil is instrumental in making sure the programme runs as it should.

He was nominated by his colleague Melissa who works in the same team, and Alison from the practice development team which also helps to facilitate the training.

Neil, who has been with the Trust since 2004, explained: “It’s been so busy over the last 12 months. There was a lot of upskilling going on in the early days of the pandemic, and people who were changing job roles slightly.

“It’s lovely to be nominated – everyone has been doing incredible work and it’s been great to have supported so many staff.”

In the nomination, Neil’s colleagues said: “Neil has been a massive support to both of us since coming into post. His advice, support and mentoring has been invaluable and we just want him to know how much he is appreciated.”