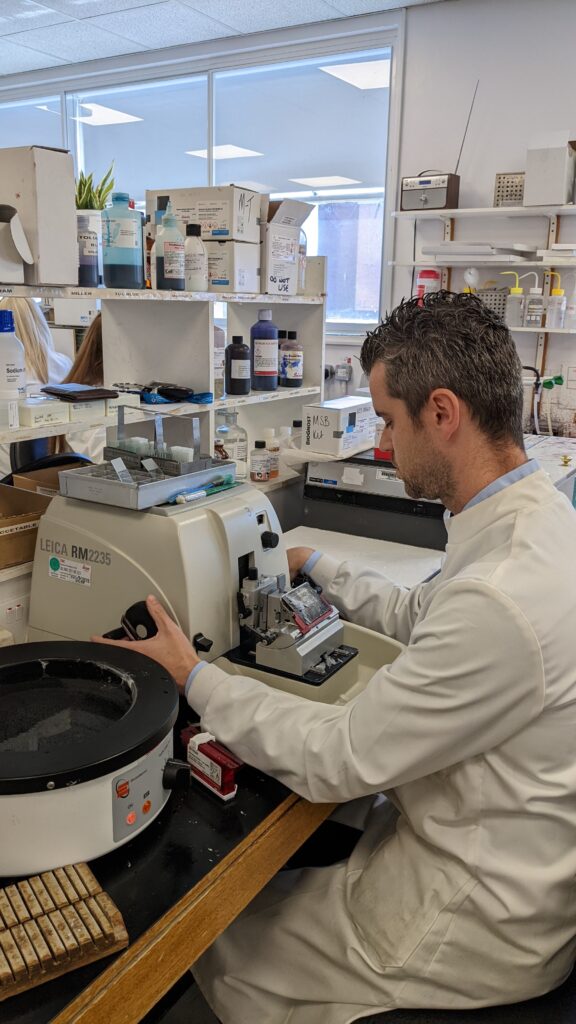 Darren Matthews at work in the histology lab

This week is National Pathology Week, a chance to highlight the important contribution Pathology makes to healthcare. The focus this year is ‘Past, Present and Future’, which for colleagues in histology coincides nicely with the opening of a new lab facility.

We’ll be hearing from many different disciplines of pathology this week, but the first is from a member of the histology team excited about moving into the new facility.

What is your role at the trust?
My role at the Trust is a biomedical scientist, I work within cellular pathology. What we deal with here is, as opposed to blood sciences where they deal with blood samples, bodily fluid samples, in histology, we deal with the actual tissue samples that are taken from the patients in theatres.

They’re brought to us and they are processed and stained using specific stains. Those stains are then used for diagnostic purposes and the outcome of that diagnostic process helps provide that patient with the best possible treatment.

Did you always want to work in this field of pathology?
To be honest, I started out in the laboratory as a laboratory assistant, and it just sounded like an interesting job. As soon as I started the job I just had a natural kind of inquisitive nature, so that kind of made me just want to learn more.

Because of that, I was just lucky where I had some incredibly supportive management, who took my inquisitive nature and ran with it, they gave me the support to go to university to do the degree and I’ve just been doing that ever since.

Are you local to Blackpool?
I live in Thornton, but originally from North Wales. I started at Blackpool Vic in 2007, so I’ve been here a fair while and before that I worked in blood sciences, in Glan Clwyd hospital in North Wales and I did that for four years. I’m kind of around about the 20-year period in the NHS service now.

What has kept you at Blackpool?
I’ve always really enjoyed what I do, being a biomedical scientist, there’s a great deal of pride which goes behind that. It’s also nice when you say to people what you do, a lot of people instantly say ‘Oh wow, that sounds really interesting.’ And it is interesting to be fair.

Are you excited about the new lab?
This building I have been working in here hasn’t changed much since 2007.

To do what we do here on the daily basis with what we have to hand, I think it’s amazing what you can do with what we’ve got. And we have, it’s always been a big dream, an ambition to get a new laboratory and now we’ve got one.

I think it’s just going to be an interesting future to see what we can do with the better equipment – I think the sky’s the limit.

So the new lab is not just about more space, there will be new equipment in there?
There’s newer equipment that will be in there which will allow us to do what we do more efficiently.

It will allow us to be working alongside each other. Now we’ve only got one cut-up room, so the actual dissection of the specimens is a great big bottleneck for this process and it has been for an exceptionally long time. But the answer to that has been to build a new laboratory which was never really a viable option until now

The new laboratory has three fully functional cut-up rooms so we’ll be able to run the three cut-ups at any one time. So not only will we be able to deal with the current workload that we’ve got coming through, faster and more efficiently, but will also be able to bring in more work as well and still get that work through within a faster time frame than we can do with the original setup.

I think there’s a lot of future potential there for that new build and for the service users as well. I think it’s an exciting prospect. 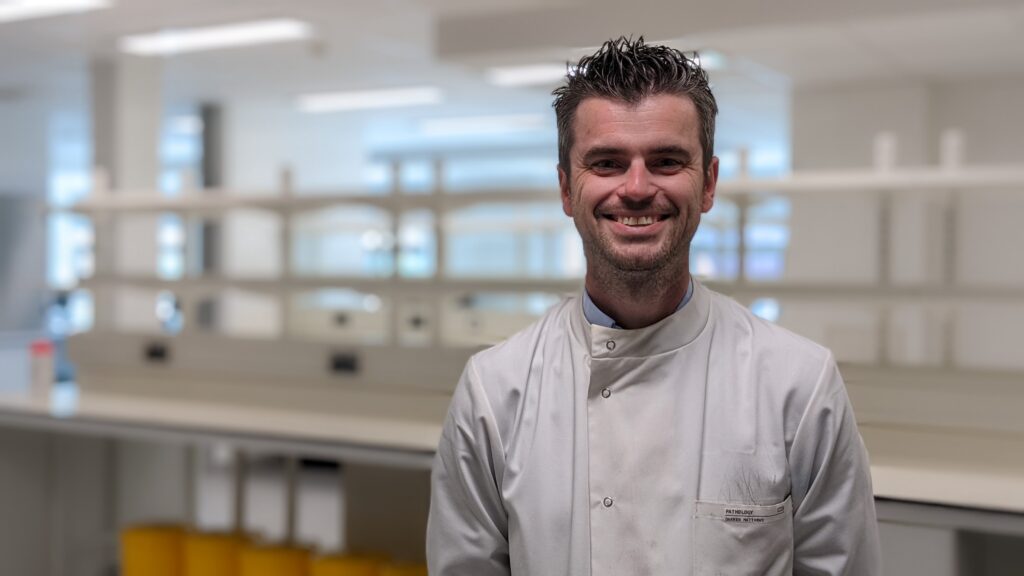 Is faster diagnosis important in pathology?
I’d say accuracy comes first; speed comes closely behind it. But also having the extra space, that will help us to train our staff better. It’ll be able to give us more facilities and we’ll be able to train people without having as much of a knock-on effect on the day-to-day work. Now training someone to be working on the station that I’m on means that someone must come off that station, and there’s no other room for that person to work. Whereas in the new lab all those things have been factored in like future-proofing. So, we’ll be able to take that person off that station and another person will be able to pick up that slack.

We will really be able to invest more time and effort into our staff. Coincidentally, we’ve had a massive influx of new staff, there are a lot of new young faces in here at the moment who are going through that training process, so the timing couldn’t be better.