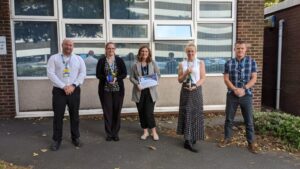 The Trust’s Workforce Deployment Services Team were commended for its roll-out of the SafeCare rostering system, software which placed live staffing data in the hands of ward managers, matrons, senior nurses and operations teams.

Trish Trench, Workforce Deployment Services Operational Manager, said: “First of all I’d like to thank all the Senior Nursing Team, Matrons and Ward Managers for their support during the roll-out and making this project a success.

“The roll-out of SafeCare commenced in January 2020, unfortunately due to the pandemic this was paused in March 2020 due to the increase in absence combined with the increase in patients.
“In June 2020 we discussed re-commencing the project with the senior nursing team, re-iterating the benefits that SafeCare would bring in assisting with the shortage of staff. The decision was then taken to re-commence the project.

“Due to social distancing we had to look at new ways of working. Therefore, we set up a number of online presentations to give an overview and benefits of the system, following these we conducted one to one training sessions via Microsoft Teams and issued robust user guides with telephone support.

“The team has access to take over end-users PCs using a system called Team Viewer to allow us to see what the issue was and how we could resolve it. The rollout was completed by mid December 2020 and the system was fully functional by 6th January 2021 and used in isolation at twice daily staffing meetings.”

Judges said of the Blackpool Teaching Hospitals winning entry: “An excellent implementation in challenging times. This project was well planned, well supported and well executed. The Trust has seen significant benefits from the SafeCare system already and has a roadmap for further improvements.”