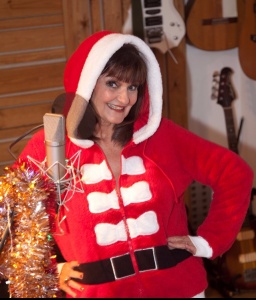 Singer and dementia ambassador Anne Nolan is set to spread some Christmas cheer at Clifton Hospital this December as she hands out presents to patients.

Arranged by charity Just Good Friends, of which Anne is patron, she will be handing out gifts on December 15.

This is the fourth year that the event will take place.

Anne said: “I always feel very honoured and humbled to be asked to take part in the handing out of Christmas gifts at Clifton hospital.

“It’s such a small amount of time that I give but a whole lot of pleasure gained from both patients and me.  Once again this year I look forward to attending the hospital and helping to share some festive cheer.”

She realised that many people have nobody in their lives and decided to set up Just Good Friends to combat loneliness, isolation and bring the community together in friendship. They now have more than 100 members.

Bev said: “I absolutely love Just Good Friends and am so dedicated to making a difference to people’s lives. Just Good Friends is there for everyone irrespective of age, disability, mental health or in fact any problems.”

“We also wanted to help wherever possible and soon realised that it would be really good if we could make a difference to people’s lives at Clifton Hospital, originally to the Ward 1 who are able to deal with complex dementia patients as well as older rehab patients, but now we support every ward.

“We just wanted people to know that we were thinking of them at Christmas time and for them to know we care, so this is our fourth year and we are so looking forward to it.”

Anne Nolan will be joining Just Good Friends at Clifton Hospital at 1pm. Also attending will be Santa, police cadets and firefighters.