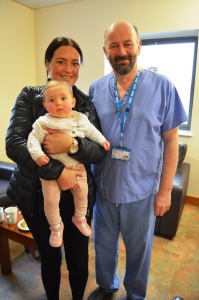 A young car crash survivor has returned to Blackpool Victoria Hospital to bring the baby she was not guaranteed of carrying, to meet the surgeon who saved her life.

In July 2014, Sandra (Sandy) was walking her dogs with her cousin, Jessica Quayle along a quiet lane in their home town of Ulverston, when a speeding car crashed into them.

Sadly, Jessica, 19, was killed and Sandra, then 25, was airlifted to Royal Preston Hospital with life-threatening injuries.

From there, she was transferred to the Lancashire Cardiac Centre for immediate treatment on her heart. Sandy was so badly injured that the ambulance driver who took her from Preston to Blackpool drove with her fingers crossed for the whole journey.

By the time Sandy arrived, the surgical team were ready and waiting to operate. Mr Duncan, had already worked all day but stayed to operate on Sandy for 15 hours, repairing her aortic transection and saving her life.

Mr Duncan, said: “Sandy sustained a ruptured or transected aorta (the main artery in the body originating from the left ventricle of the heart) when she was hit by the car in addition to serious internal pelvic injuries and a femoral fracture.

“This is an immediately life-threatening situation and many patients will die before reaching hospital.

Sandy had also suffered a shattered pelvis which in itself could have killed her. It was thought she may also be paralysed and she was wheelchair bound for three months.

Although Sandy has a 10 year-old son, Kieran, it was never certain that she would be able to carry another baby because of the severity of her injuries.

As soon as Sandy was well enough, the former beautician realised the enormity of what had happen and how son, Kieran, would have been left alone if she had died.

Her various surgeons were all wary about the possibility of her trying for another baby, such was the extent of her injuries, but she found that she was pregnant in November 2015.

She was heavily monitored both in her local hospital, Furness General, and in Manchester. A healthy Alexa Grace was born four weeks early by C section last summer.

Sandy said: “The last three years have completely changed my outlook on life.

“You never know when your time is up – you have to enjoy every day. 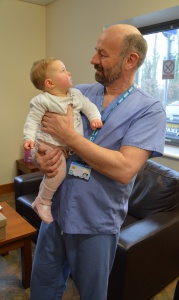 “I am so grateful that Mr Duncan was still at the hospital on the day of the crash. He is a miracle worker.

“There are no words that can describe how grateful I am to him. I really would not be still here had it not been for him, so neither would Alexa.”

Mr Duncan, added: “I was delighted to see Sandy today with Alexa – it’s fantastic that she has recovered so well and been able to have another baby

“She has come through a lot and still has more surgery to face.

“I have great admiration for her fortitude and the determination that has got her through the past two years.

“I was very happy to see her and her family today. This sort of visit really makes our task seem worthwhile.”