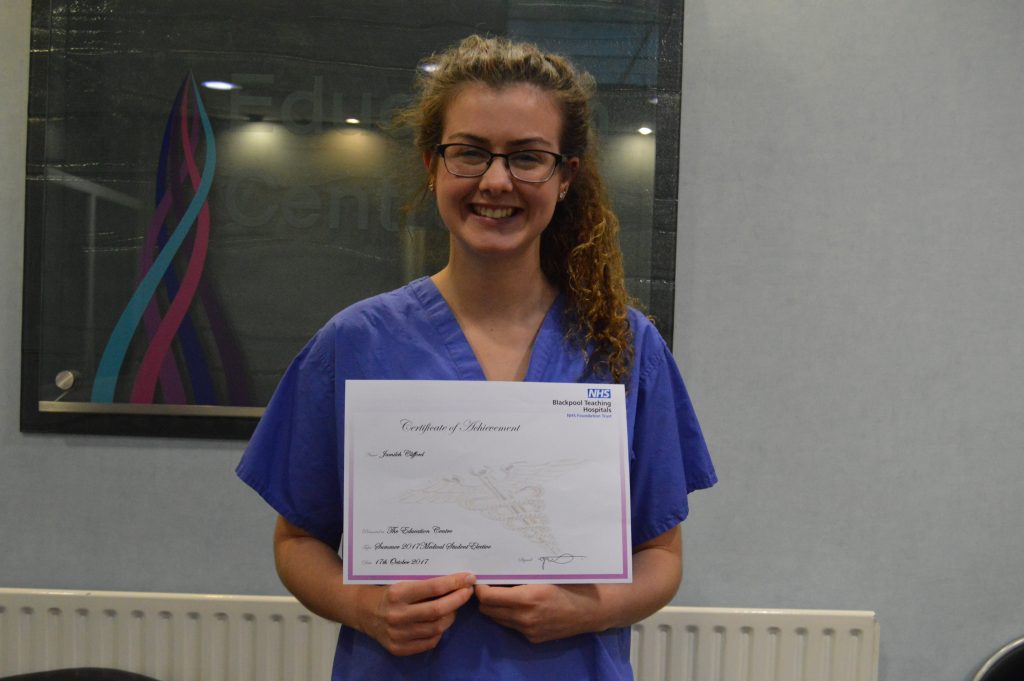 MEDICAL students have been praised for passing on inspiring stories about their summer elective placements.

As part of the medical teaching curriculum, medical students in their 4th year have to choose where they would like to spend their six week placement. The students can pick anywhere they like but they have to arrange the contacts, accommodation and organise their own finances.

Seven students put together presentations to share their elective placement experiences and all the presentations were filled with information, costs and pros and cons.

Jamileh Clifford, who spoke about her time in Zambia in Africa was voted the best presentation. Her inspiring talk was filled with examples and memories she gained living and studying in a very rural, undeveloped hospital which often ran without power or basic equipment.

Jamileh said:” It was a very challenging experience; I felt I had a lot of responsibility on the labour ward.

“I learned a lot about my limits, as I was able to see different cases and I had to trust my own ability, as the patients very much relied on me”.

All the fourth year students voted and Jamileh was announced the winner. She won a voucher as part of her work.

Two of our students decided to stay local and chose Blackpool as their hospital of study.

Gethin Hopkin said: “Blackpool has a huge amount to offer. I was able to gain six weeks of professional learning at a very low cost”.

Another 5th year student, Louise Bamford, also chose Blackpool. She said: “I was inspired by a current trainee doctor to study in Obstetrics and gynaecology.

“I was able to concentrate on my finals exams and being in Blackpool meant I didn’t have to worry about any resits, as I was already based in the UK, and wouldn’t have to fly home early”.

Sarah Long spent her summer near home in Eastbourne.

Sarah said: “I loved working on AMU and being able to shadow the foundation year doctors which is where I will be next year. I saved money and gained great work experience”.

Two of our students, Daniela Santos Ferreira Alves and Jack Pothecary both spent their elective placement at a hospital in Bali. They described the hospital as ‘undeveloped with the standard of care being lower than it would be in the UK’.

Jack said: “The staff did a lot with their resources, and we were exposed to less common scenarios than we would be in the UK”.

Daniela and Jack also talked about the amazing cultural experiences they gained from their time in Bali. Their presentation was full of pictures, highlighting the memories they had from their experience. They advised their younger peers about the costs and the vaccines they would need if they were to study in Bali.

The penultimate speaker was Sean Testrow who also travelled some distance for his elective placement. Sean studied in Australia, based in a trauma unit at a hospital in Sydney.

Sean said: “I wanted more clinical experience in emergency care before starting my fifth year. I was able to learn a lot about preventing pneumonia and I gained a lot of experience within a trauma service”.

Undergraduate coordinator Roxanne Sheward said: “The team and I really enjoyed all of the presentations. It was great to get a glimpse of the different experiences our 5th year students had this summer!

“The electives are a fantastic opportunity to help the students put into practice skills they have developed over 4 years of study in very different environments, often in developing countries lacking in many resources.

“I think the electives build the students’ confidence and prepare them for their final year of study.”