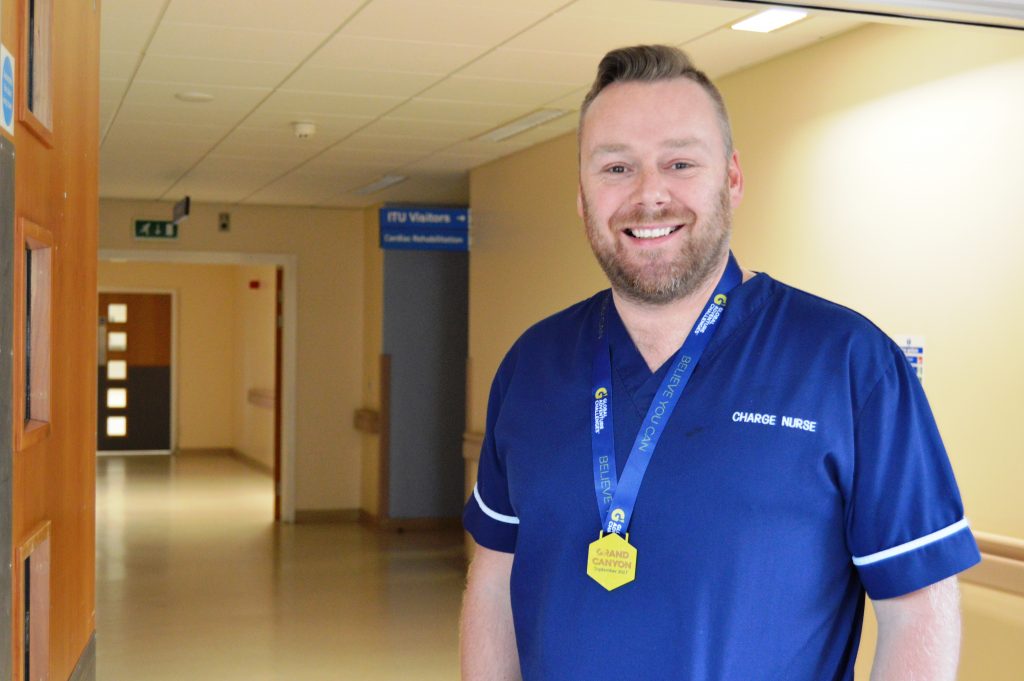 A BLACKPOOL Victoria Hospital Charge Nurse has just completed an epic trek in the name of charity.

Luke, and other fundraisers from different charities, descended around 3,100 feet into the Canyon.

The group followed an ancient Indian trail which lead them into the Havasupai Indian Reservation with its bright blue green lagoons, huge waterfalls and breath-taking scenery.

Walking 10 to 15 miles a day, Luke wanted to quit many times. He said: “I was anxious enough at the thought of being with 24 strangers, but when I found out that there would also be rattlesnakes, tarantulas and scorpions, I was really apprehensive.”

The trekkers walked for most of the day accompanied by specialist guides and pack horses carried supplies such as food and water.

The group camped in tents on the Canyon floor, washed in rivers and had to use the most basic of toilet facilities.

Luke said: “Once we had spent the first day acclimatising, we spent most of our time just walking, cutting our way through bushes at one point and trying to avoid the sun. At one point I threw up, I was so fatigued.’’

But there were some amazing parts of the trek too. The group walked to five different waterfalls along the route which were an oasis of lush green foliage and beautiful crystal blue water.

They also had a geology lesson and found fossils from one of the guides in the oldest part of the Canyon which pre dates the dinosaurs.

Climbing back out of the Canyon was the hardest part of the trek. The group were allowed to make their own way up as long as they were not alone.

Luke said: “Coming out was just hell. My feet were blistered and bruised. It took every single ounce of muscle power to just get up one step.

“But once we had reached the top, we were all so relieved and amazed, we all broke down in tears.

“But after all we endured, we have made some lifelong friends and I came out realising that if I can get through that, I can take on the world – I never expected to feel like that.’’

Interim Head of Fundraising for Blue Skies, Ann Hedley, said: “Luke and our other trekker Craig Holland have been tested to the limit. I am full of admiration for them and so humbled by their achievement. They really have gone the extra mile for Blue Skies.

“This experience has been one of the best of my life. I couldn’t have done it without the people around me. Thanks so much to the people who have sponsored me and to Blue Skies Hospitals Fund for giving me the opportunity.

“In fact, it’s made me hungry for more and I’m now considering my next big adventure. Watch this space.”

Luke has raised £3,600 so far and has a target of £4,000. You can still sponsor him by visiting: https://www.justgiving.com/fundraising/cardiacitu