A Blackpool midwife, who returned to working at the front-line of the NHS following retirement, has been appointed to a new role at Blackpool Teaching Hospitals NHS Foundation Trust. 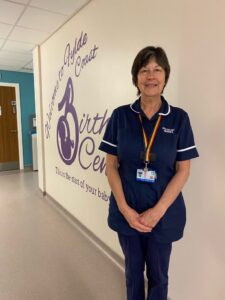 Moira Broadhead is the Trust’s new Fetal Monitoring lead midwife. It is a role which has been created in line with the improving patient safety, as part of the Saving Babies’ Lives project, which was launched in 2015, with the ambition of halving the rate of stillbirths by 2030.

The new role will see Moira delivering training to the Trust’s midwives to national guidelines focusing on fetal monitoring, the process of watching the heartbeat of the unborn child in the mother’s womb.

Moira, who spent 44 years in the NHS, 22 as a midwife, before retiring, is looking forward to her new role.

“I’ve worked full-time for more than 40 years so it was a bit of a shock to retire,” Moira said.

“I came back as a midwife, working on the shop floor initially, but then this role came up.

“The Saving Babies’ Lives initiative, which the Royal College of Obstetricians and Gynaecologists brought out, recommends that you have a midwife whose job is to coordinate the training and make sure everybody understands the importance of fetal monitoring.

“This will be a patient safety role. I will be concentrating on situational awareness, human factors, what’s going on around you for midwives, who to talk to, who to escalate to.”

Moira has already begun training the midwifery team at Blackpool Teaching Hospitals, in slightly different circumstances due to the pandemic restrictions, but the initial feedback has been positive and she is keen to make a real difference through 2021 and beyond.

“The NHS has changed massively, it is unrecognisable,” Moira continued reflecting on her time as a midwife.

“We are really focused on that quality agenda and safety.  Making sure everything we do is based on proper research and that we keep up-to-date with our research and training so that we can deliver a safe service.

“The family unit at Blackpool Victoria is great, it is a really friendly unit. We are really quite dynamic because we have been leading the way in this Saving Babies’ Lives initiative. We were one of the first trusts to implement it and it made a big difference with our still birth rate, it has been massive.”