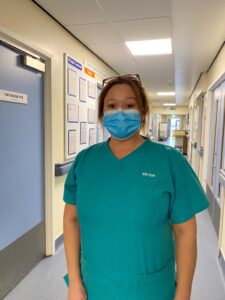 Sister Kelly Dunning from Ward 8 at Blackpool Victoria Hospital has received a Going The Extra Mile award for her ‘big heart and high standards.’

Staff at Blackpool Teaching Hospitals NHS Foundation Trust can nominate colleagues for the award, which is an opportunity to sing the praises of someone who has gone the extra mile in the line of duty.

Kelly has been put forward for the award by her colleague, Ward 8 Matron, Fiona Verenakis, who in nominating her said: “This year she has kept the ward running, doing her own job and stepping up, acting as the ward manager.

“Kelly has the biggest heart, the highest of standards and will do anything for her team and patients.”

Speaking about receiving the Going The Extra Mile award, Sister Kelly said: “It means a great deal to feel appreciated. I’ve taken on the role of manager while our manager was shielding and poorly with Covid, so I have had to do my job and another job, but the guys on the ward have all helped me, it has been a joint effort.”

Do you know a member of staff who is Going The Extra Mile in their work at the Trust? Why not nominate them for the award through the nomination form on the intranet – search for ‘Going the Extra Mile.’