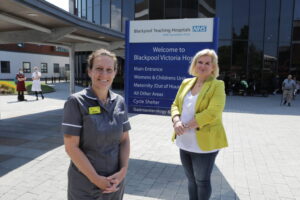 Blackpool Teaching Hospital’s Jackie Brunton has been shortlisted for a major national award recognising the ‘best of their profession.’

Jackie, the Trust’s Lead Nurse for End of Life and Bereavement Care, is one of just three people to have been shortlisted for the Who Cares Wins awards Nurse of the Year category. The winner will be honoured in a ceremony in October hosted by Davina McCall and broadcast by Channel 4.

Jackie was nominated by Sue Ayrton of Blackpool, whose father Neville died from Covid at Blackpool Victoria Hospital early in the pandemic. She supported Sue and her family to remain in contact with Neville, 73, in his last days.

Since then, Jackie has led the Trust in developing a bereavement support service, establishing the Swan Suite facility and a full-time bereavement team.

Sue said: “I was contacted by Blackpool Victoria Hospital as my father was in intensive care on a ventilator having suffered from Covid and I was told he was at the end of his life.

“Within about ten minutes this lady, Jackie, called me and said she would facilitate getting to speak to my father. As heart-breaking as it was, it brought me some kind of peace.

“Jackie is the most deserving of the best nurse award and is just the most inspirational person as well – she gave me hope when I didn’t have any.”

Jackie said: “Sue’s was one of the first families we spoke to when the hospital had to stop allowing visitors. It was really challenging for everyone involved and difficult for both family members and staff.

“Sue’s family were the first we supported through that time, and it was both difficult and devastating but Sue appreciated that people were honest with her.

“I am really, really flattered to be nominated for this award. Sue had the worst situation in those early days, and I’m humbled and overwhelmed to be nominated by her. I’d like to dedicate the award to all those who have lost their lives and their loved ones across the Fylde Coast.

“We’ve all worked as a team, and I’m just one part of that Blackpool family. The legacy now is that we have our full-time Swan bereavement team and Swan suite which is something to be really proud of.”

The bereavement service has now become permanent at Blackpool Victoria Hospital and continues to work alongside hospital and community palliative care teams, Trinity Hospice, The Linden Centre, and the Trust’s Chaplaincy Department to offer support to anyone suffering grief to help them cope with bereavement.