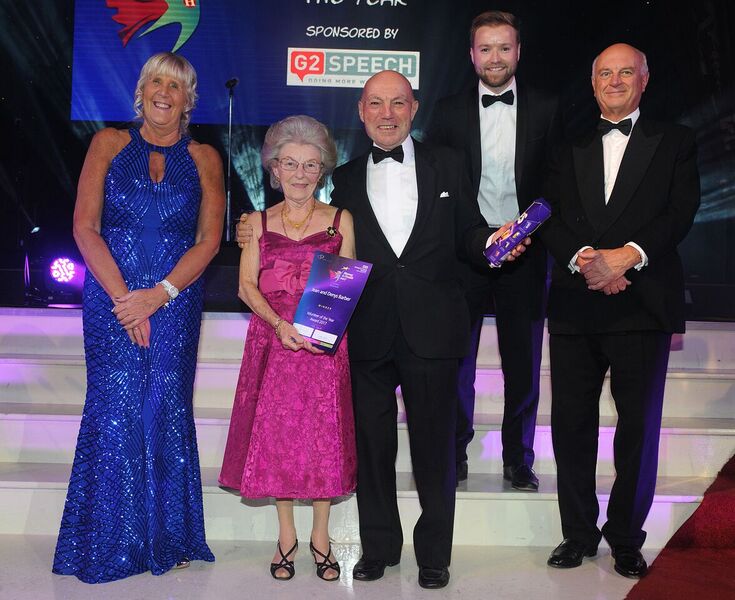 Jean and Denys Barber, winners of the Volunteer of the Year Award

Hundreds of NHS staff gathered at an awards ceremony at Blackpool Tower to honour colleagues who have shown extraordinary levels of care, compassion and innovation to ensure the best possible care for patients.

More than 500 nominations were received in just seven categories for Celebrating Success 2017 and the judges had a tough decision drawing up a shortlist.

The awards, presented by Radio Wave’s Andy Mitchell and Hayley Kay and kindly financed by sponsorship from Blackpool Teaching Hospitals NHS Foundation Trust partners, had a heroes theme reflecting the work done by staff both in the hospitals and in the community.

The Patients Award was won by surgeon Mr Joseph Zacharias and his Cardiac team.

They were nominated by a number of patients who commented on the professionalism, compassion and care shown by every member. Many said they had been given their lives back and were able to have the chance to enjoy family life again thanks to the excellent treatment received.

Runners-up in the category were rehabilitation therapists, Sheila Dryden and Joanne Tomlinson, the Neonatal Unit and Ward 16 at Blackpool Victoria Hospital.

Haematology was named as Clinical Team of the Year for improving both the physical and psychological wellbeing of their patients. Runners-up in this category were the Acute Medical Unit (AMU) and the Acute Response Team.

Following the cyber attack earlier this year, IT and Health Informatics were awarded the Non-Clinical Team of the Year for the way the entire team responded to the situation and ensured business continuity was maintained and systems brought back on line.

Communications and Voluntary Services were named as runners-up in this category.

An inspirational nurse was named as Unsung Hero. Linda Broadbent, ward manager of Clifton Hospital Ward 1, was commended for her work on dementia.

The Innovation and Service Improvement award went to Clifton Outreach Support Team who safely bridge the gap between hospital and home ensuring patients have a seamless transfer between services.

Physiotherapist, Simon Haywards and the Nurse-Led Intravenous Therapy Service were named as runners-up in the category.

Volunteers do a tremendous job enhancing patient experience and the award of Volunteer of the Year went to husband and wife, Jean and Denys Barber, who put in countless hours to help patients, visitors and staff at Blackpool Victoria. Runners-up were named as Jim Hatfield and Jane Roberts.

Employee of the Year went to special surgery pre-assessment manager, Louise Thompson who was described as having an excellent relationship with both patients and staff. Nursing sister, Sarah Darvill and Pathology IT Manager, Jake Castle took the runner-up places.

The final honour, The Chairman’s Award, was presented to the Neonatal Unit for being forward thinking and innovative in the way they care for their patients and families in often difficult circumstances.

Wendy Swift, Chief Executive Officer of the Trust, praised the work done by all staff within the Trust saying: “We have been overwhelmed by the quality and quantity of applications received and it is humbling to read reports of the care and expertise our staff give to patients both in the hospitals and in the community.

“We are grateful to our generous sponsors who support this event allowing us to pay tribute to such innovative and caring staff.”