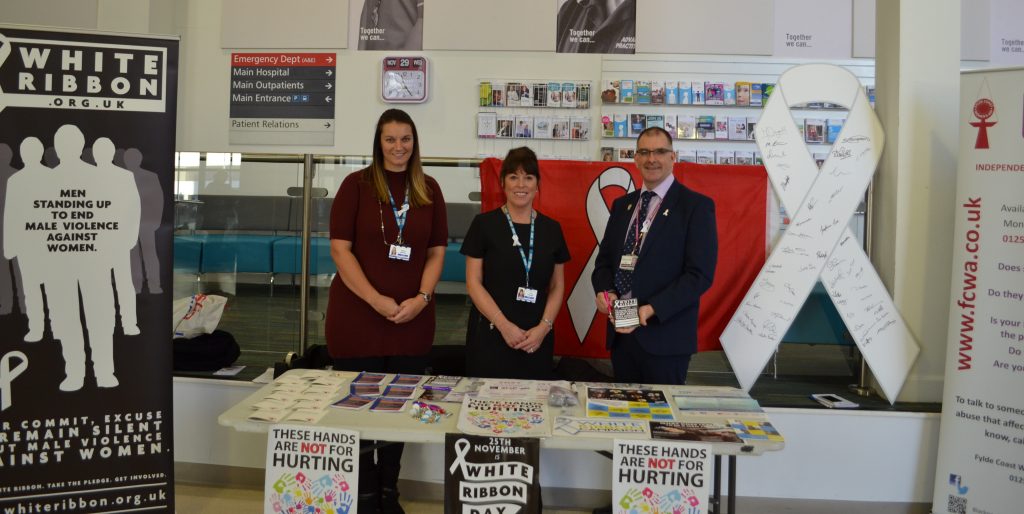 STAFF at Blackpool Teaching Hospitals NHS Foundation Trust showed their support for this year’s campaign to tackle abuse against women and girls.

Often it takes a tragedy to seek a remedy. Such was the genesis of White Ribbon.

In 1989, on the afternoon of December 6, a student at the University of Montreal massacred 14 of his fellow female students. His actions traumatised a nation and brought the issue of violence against women to the forefront of our collective consciousness.

In response, a group of men in Toronto decided to speak out and work to stop men’s violence against women. In 1991 they initiated a male-led movement known as White Ribbon, with an annual awareness-raising event (White Ribbon Day) held between November 25 and December 6 every year.

It is now an international effort in over 57 countries, of men and boys working to end violence against women.

Lisa said: “White Ribbon Campaign encourages males of all ages to make a pledge to never to commit, excuse or remain silent about violence against women.

“Blackpool council, on behalf of Blackpool Domestic Abuse and Interpersonal Violence Partnership achieved the White Ribbon Accreditation. As part of this multi-agency accreditation several male ambassadors have been appointed.

“In recognition of this event and to raise awareness, we held the event today with Coun Cain who is one of the Ambassadors. We also joined forces with the Renaissance group who support victims of sexual abuse.

“It was a really successful day and great to see so many people interested in learning more about the campaign, signing the pledge and raising awareness of domestic abuse.’’

There is a dedicated Health IDVA service available within Blackpool teaching Hospitals NHS Foundation Trust to support both men and women, patients or staff, affected by domestic abuse.