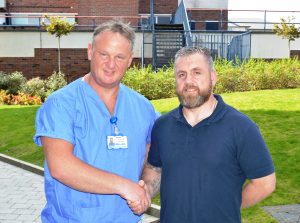 A security guard who was attacked outside a supermarket in Blackpool has thanked an off duty health professional for saving his life.

Peter Mowbray, an Operating Department Practitioner from Blackpool Victoria Hospital, went to the aid of Darren Fisher when he was hit over the head with a bottle outside Sainsbury’s supermarket on Talbot Road on Tuesday, August 16.

Darren, 41, from Blackpool, said he would not have survived if it hadn’t been for Peter’s swift and professional actions.

Peter realised it was likely that Darren had a bleed on the brain and even used the torch on his smartphone to do observations.

Darren said: “It’s an amazing thing that Peter has done. I’m forever in his debt.”

Peter, 49, who has worked at the hospital since 1986, had finished work for the day and was out for a drive in Blackpool at around 8.30pm with his wife Louise and 15-year-old son Bradley.

They were driving past Sainsbury’s supermarket when Bradley spotted Darren lying on the pavement and shouted for his dad to stop the car. Peter pulled up on the pavement then he and Louise went to Darren’s aid.

Peter informed the store manager that he was a medical professional and took charge of the situation. The ambulance service and police were called as Peter surveyed the scene. 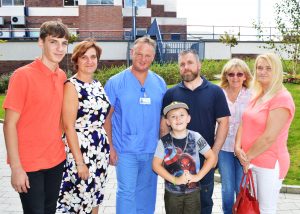 Peter said: “There was blood and glass everywhere.

“My medical training immediately kicked in. I could see that Darren’s left pupil was ‘blown’ which indicated a serious head injury.

“I got him to sit upright to reduce the pressure to his brain. If I had got him to lie down his brain would have swollen and he would possibly have had brain damage or might even have died.

“Louise was on her knees supporting him to stay in an upright position. By keeping him upright we tried to avoid a brain injury. It could have gone either way.

“Darren’s hand was bleeding from the glass so I put a pressure dressing on it from the store’s medical kit and looked after him while we waited for the ambulance to arrive.

“After half an hour the police came and asked me what I needed. Two burly police officers came with a medical kit.

“It had complete breathing apparatus with an oxygen mask and a pulse oximeter to measure oxygen levels and the pulse.

“I did Darren’s neuro obs on my iPhone. It has a pen torch on it and I used that to look into his eyes. I used it to make sure he was not deteriorating.

“Darren was aware of what was going on throughout. I told him not to move even though he had cramp in his legs. I told him he had a head injury and could deteriorate rapidly if he moved. He understood the importance of keeping calm and still. 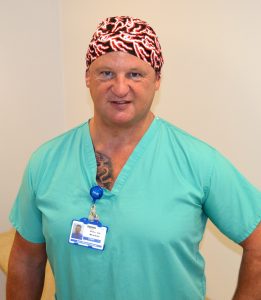 “It was so important to try to preserve his brain – the last thing you want is a man with a young family suffering a brain injury and not being able to work.

“Everyone worked together to do their best for Darren on the day. It was a real team effort.

“It was quite frightening. In a hospital setting you can monitor everything. All I had was gravity and some basic bits of equipment.

“I felt really vulnerable but someone had to take control. I’m immensely proud that it all came together in the end.

“It’s a testament to the training I’ve had at the hospital that I was able to save this gentleman’s life.”

Darren, who has five children of his own and nine between him and his wife Colette, 47, was in hospital for three days after the attack and is making a steady recovery.

The first time he left home after his ordeal was to thank Peter personally at the hospital on Tuesday, August 23.

He said: “I wanted to thank Peter for saving my life.

“I’m still feeling a bit light-headed. The swelling has gone down.

“If Peter had not been there I don’t know what would have happened. I’m still able to be a dad to my kids now.

“All of the staff at the hospital were brilliant. I was treated like royalty.”

Darren got in touch with Peter through Facebook to thank him and to say how grateful he was.

Peter said: “We’ve become friends now. The comments on Facebook from Darren’s family have been lovely. They have thanked me for saving his life.

“It is humbling to receive such nice messages. It makes me feel as a person that I really made a difference to someone.

“It’s what my job is all about – making a difference and helping others. It all reflects well on the hospital.”

In his role as an Operating Department Practitioner (ODP), Peter usually works with anaesthetists in operating theatres. Over the years he has also worked in the Emergency Department and on ITU (Intensive Trauma Unit).

Peter praised his son for spotting Darren: “If it hadn’t been for Bradley it could have been a very different story. He deserves huge credit.”

Bradley, who attends Hodgson Academy and assisted Peter until the ambulance arrived, said: “I was a bit nervous because I had never been in a situation like that before but my main priority was making sure Darren was ok.”

Peter also has a daughter called Charlotte and a son called Christopher. 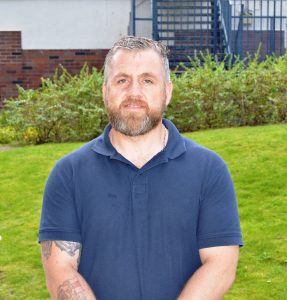 Sainsbury’s has also thanked Peter and sent him a card, chocolates and a bottle of Prosecco.

Peter added: “As health care professionals we are all duty bound to stop and help if we see someone injured.

“I would like to think other people would do the same thing if it happened to me.

“I’m happy that, by all accounts, Darren has made a full recovery. I hope we’ll have a life-long friendship.”