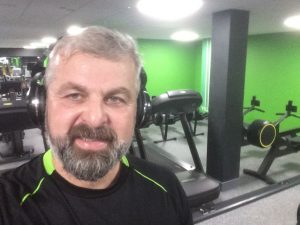 Cardiac surgeon Nidal Bittar is training for the London Marathon in support of Blue Skies Hospitals Fund and UNICEF’s Children of Syria appeal.

He’s well used to taking on epic cycling charities in aid of charity, but cardiac surgeon Nidal Bittar has swapped his wheels for running shoes as he prepares for this year’s London Marathon.

Mr Bittar, who has cycled across the desert, biked from the Tower of London to the Eifel Tower and ridden from coast to coast, admits he is taking himself out of his comfort zone for his latest challenge, which he is doing to celebrate his 50th birthday.

Mr Bittar, who works as a cardiothoracic surgeon at the hospital and across the North West, said: “I have never been a runner, and didn’t run at all until 2011 when I started training for the Great North Run the following year. I managed to complete that with a steady, continuous run, in two and a half hours.

“After that I focussed more on cycling instead, and decided to do something new ahead of my 50th birthday. I started running again in the summer and am now following a 16 week fitness programme to prepare me for the big day in April.

“I’m not worried about the time on the day. I just want to finish it in one piece. It’s all about being able to do something for good causes, and these two charities are close to my heart.

“I’ve raised thousands for Heart of Gold over the years and am pleased to be able to keep doing so. Hopefully I will enjoy this challenge as much as all the others I have done.”