This year’s event broke all records with more than 450 entries including 150 in The Gazette’s Patients’ Award category which sees people who have received treatment nominate both clinical and non-clinical staff.

The event had an Olympic theme of ‘Going for Gold’ and the finalists truly shone.

Funded entirely by generous sponsors, the ceremony was held in the Empress Ballroom at the Winter Gardens in Blackpool on Friday, November 25, and included staff from across the Fylde coast and North Lancashire.

Wendy Swift, Chief Executive (Interim), of the Trust, said: “Our Celebrating Success Awards recognise the exceptional work that is carried out by our staff.

“We are privileged to have these highly committed members of staff who strive for excellence and are constantly working to provide the best care possible for our patients.”

Chairman of the Trust, Ian Johnson, added: “This year’s winners demonstrate the breadth of talent within our Trust.

“I wish to congratulate all of our finalists for their dedication to patient care and for constantly striving to improve the services we provide.”

Voted for by the public, the highly coveted Gazette’s Patients’ Award was won by Mr Jawad Islam, a Consultant Urologist for the Trust. 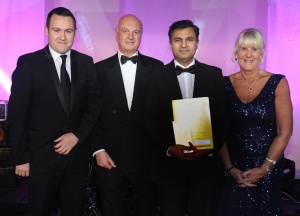 The wife of a patient with major health complications praised Mr Islam for his honesty and for instilling confidence in all concerned. She was particularly impressed when Mr Islam visited her husband while on annual leave. Another patient described Mr Islam as understanding, approachable and calm. His care for the whole family was greatly appreciated.

The runners-up in this category were Ward 7 (now part of Ward 15B) and the District Nursing Team, Lytham.

More than 20 patients took the time to nominate Ward 7 for providing exceptional care in a warm and friendly environment. Patients wrote of the importance of being kept informed of how their treatment was progressing and how this was delivered in an empathetic and compassionate way.

The District Nursing Team, Lytham, was described as unfailingly professional, cheerful and caring. One family member said the nurses had enabled her and her husband to make the most of everyday life by helping to solve problems, giving practical advice and offering the best support possible. 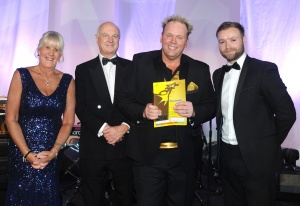 The Trust’s Head of Resuscitation, Anthony Freestone, was the winner of the Together We Care Award which reflects the organisation’s vision and values.

Anthony won the award for constantly striving for excellence and for embodying the Trust’s values of being people-centred, positive and compassionate. His overwhelming desire was to improve himself and the service for patients and the public. In highly stressful situations he was able to show kindness and compassion to patients and relatives.

Runners-up in this category were Dr Peter Hayes and the Specialist Continence Service and Home Delivery Team.

Dr Peter Hayes has dedicated much of his career to the Trust and was described as an extremely positive and people-centred leader. As Deputy Divisional Director of Unscheduled Care, he was praised for providing support and direction to all staff and for masterminding significant improvements in patient care.

The Specialist Continence Service and Home Delivery Team was nominated for working to fulfil the Trust’s values of being people-centred, compassionate and positive as well as providing a rounded service to meet the needs of all. The team was also praised for breaking down stigmas and for offering a caring service. 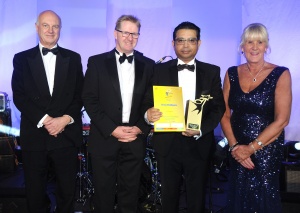 Dr Venu Kollipara won the Trust’s Employee of the Year award for his unstinting work as Head of Department on the Acute Medical Unit (AMU). He led the team by example during the creation of the Trust’s Ambulatory Assessment and Combined Assessment and Triage Units. He was described as a great role model who truly embraced the team spirit. He also inspired AMU staff to constantly strive to improve patient safely and patient flow.

The runners-up in this category were Rachel Ebert, a medical secretary and Gill West, a Specialist Nurse Practitioner in the Sexual Health Department.

Rachel was honoured for making a valuable contribution to the cardiac team and the Trust through her positive attitude and determination to succeed. Her team described her as a kind, considerate and compassionate member of staff who was always ready to assist others and who devised innovative ways of working to save time throughout the year.

Gill was described as the epitome of an excellent manager, oozing warmth, concern and genuine care for staff, patients and the service. She was said to demonstrate the utmost professionalism with her clients, members of staff and visitors. She went out of her way to mentor staff and to foster a culture of professional growth. 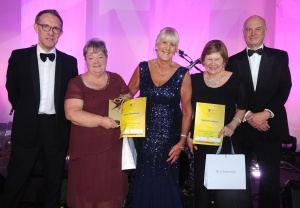 Ruth Boardman and Rena Shanahan were the winners of the Trust’s Golden Heart Award which recognises people who have saved or changed a life.

Described by their nominee as “angels in disguise”, Ruth and Rena set up the Hint of Pink charity based in the Trust’s Breast Care Centre in 2010. Both are patients and former members of staff who wanted to give something back to the service that had helped them. They support others by volunteering at the Breast Care Centre every week and have raised a large amount of funds to enhance care for breast cancer patients.

Paul was described as “a one man charity money making machine”. He dedicated much of his own time to raising money for Brian House Children’s Hospice through special events. His desire was to better the circumstances of as many people as possible.

Mr Duncan was nominated for going the extra mile in more ways than one! He was honoured for showing huge compassion to his patients and, along with his colleague Mr Nidal Bittar, for raising charity funds by undertaking gruelling cycle rides. Mr Duncan was also described as a great mentor to his staff who was 100 per cent committed to his patients, often visiting them while on leave. 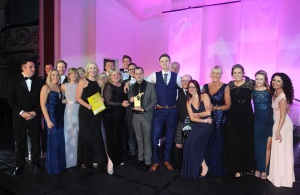 The CT Department, winner of the Clinical Team of the Year Award

The title of Clinical Team of the Year went to the CT (Computerised Tomography) Department; a forward-thinking team that has dramatically improved the service it provides. The efforts of administrators, radiographers and other team members have resulted in waiting times being cut dramatically by 33 per cent over the course of 12 months.

Runners-up in this category were the Emergency Department and the Early Supported Discharge team.

The Emergency Department has responded to unprecedented demand over the last 12 months with strength and determination. The team have ensured that patients have continued to receive the best possible treatment.

Patients have a chance to go home sooner thanks to the Early Supported Discharge Team. Team members have designed an integrated model of care through which patients receive intensive therapy, helping them to regain their independence. 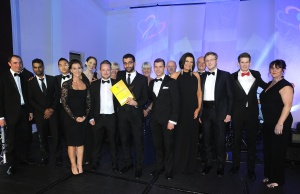 The Patient Tracker Team, winner of the Non-Clinical Team of the Year Award

The title of Non Clinical Team of the Year went to the Trust’s Patient Tracker Team. This multidisciplinary team devised an interactive communication tool to improve patient care. A patient’s journey can now be tracked from referral to transfer or discharge through this easy to use electronic system.

Runners-up in this category were The Corporate Bench and E-Rostering Team and the Catering Department.

The Corporate Bench and E-Rostering Team has successfully recruited more than 400 Healthcare Assistants and 300 Registered Nurses to the Trust. This has contributed to a reduction in agency spend as well as providing continuity of patient care.

The role food plays within a hospital is of vital importance and the Catering Department is dedicated to providing healthier food to patients, visitors and NHS staff. The team was praised for its work on the introduction of a new electronic meal ordering system for patients. 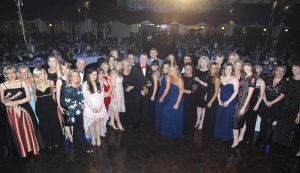 New ways of working will be key to the success of the NHS in the coming years, so the Trust’s Innovation and Service Improvement Award went to the recently established Extensive Care Service.

This ground-breaking service sees all clinical team and support staff working together to improve the health of patients with long-term conditions. Patients are helped to manage their conditions and the need for unplanned hospital stays is dramatically reduced.

The runners-up were Alex Murphy and the Fylde and Wyre Falls Car.

Alex was recognised for developing a programme to improve child development and readiness for school. The project has helped more than 100 parents of three-year-olds and has been rolled out in Fylde, Wyre, Lancaster and Morecambe. Parents described the scheme as excellent.

Staff from the Trust’s Rapid Response Team and the North West Ambulance Service have worked together to create and run the Fylde and Wyre Falls Car service. The service provides an urgent response to 999 and 111 calls from people who have fallen at home or in the community and has achieved a 55 per cent drop in unnecessary hospital admissions. 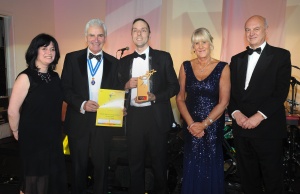 The title of Radio Wave’s Unsung Hero went to Adam Dugdale who works in the Trust’s Filing Team. Adam was described by his colleagues as a passionate and dedicated employee who always offered to help staff when they were struggling and who helped his department to develop and run smoothly.

The runners-up in this category were Directorate Manager of Unscheduled Care, Natalie Davidson and Practice Development Sisters, Sharon Vickers and Sharon Ellis.

Natalie was recognised for giving everything to her role and for her commitment, positivity and commitment to excellence in all of the areas she covers. She was said to have a tough job to achieve Emergency Department targets and was praised for working innovatively to find ways to deliver the best quality of care possible for the local population.

Known collectively as ‘The Sharons’, the Practice Development Sisters have provided huge support to overseas nurses and their families and have been inspirational in the work they have done with local schools and young people. They have encouraged youngsters to become Young Health Leaders, empowering pupils to deliver health messages to their peers. 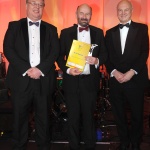 Mr Johnson decided to award £500 to Anthony Freestone to be spent on new initiatives within his department. He also awarded £250 to Mr Andrew Duncan and £250 to Alex Murphy.

A special performance was put on by the Trust Choir and the presenters for the night were Radio Wave news editor Andy Mitchell and presenter Hayley Kay. 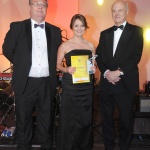 Alex Murphy with Ian Johnson and a representative of award sponsor, Emis Group