A Ward Manager at Blackpool Victoria Hospital is taking early retirement this week after more than 30 years in the NHS. 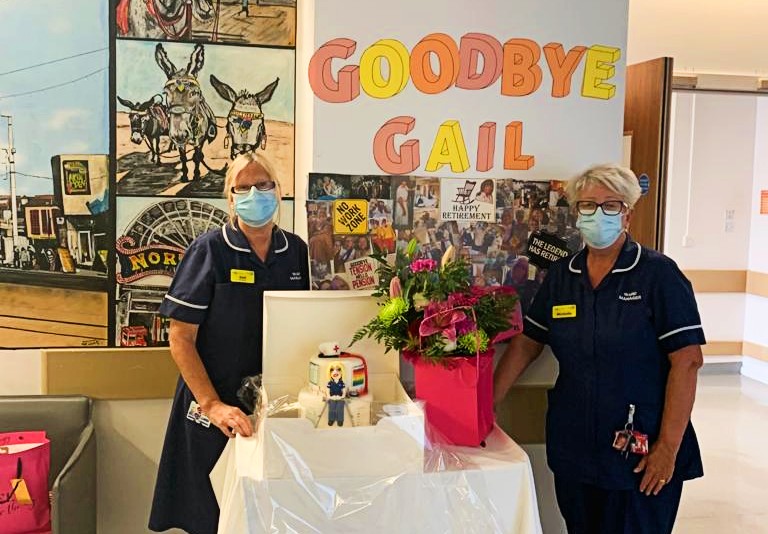 In an emotional farewell, Gail Bewick, said that she was leaving the Trust ‘kicking and screaming’ but that her heart will always be with the hospital which has played such a significant role in her life.

Gail’s love and passion for nursing was first ignited when she was a patient on the Children’s Ward at Blackpool Victoria to have a tonsils removed as a youngster, getting told off for giving orange juice to a young boy who was due for surgery.

But after major surgery on her lungs at the age of 12, she was told that she could never be a nurse.

“I was tiny and I had a big lung operation. And then and they said I would never carry children, I would never do nursing,” Gail said.

“The surgeon told me that I had actually died on the operating table, but that I wasn’t like anyone else and I had fought back.

“They did not have an ITU bed then, I was on the old children’s downstairs in a side bay, with a big drainage bottle for the lung.”

Gail had taken an apprenticeship with BNFL and was ready to study sciences at Lancaster University before a chance conversation with one of her lecturers revealed that Blackpool Victoria was recruiting for nurses, and that with a letter from her GP she could begin her career as a student nurse.

After training to be a nurse, she was offered the opportunity to work in coronary care, seeing some of the pioneering work as the centre developed into a centre of excellence. In 2013 she was seconded to Ward 35 and remained there to this day, despite having initial reservations about leaving her colleagues in cardiac.

“I’ve seen lots of innovations and pioneering things from cardiac. The defibs, they were this price of the house when I first started, they were twenty to thirty thousand pounds. Now they are putting them in all time,” Gail says reflecting on her many years managing on the cardiac wards.

“One of my old bosses asked if I would go to Ward 35 for a six-month spell as they didn’t have a band seven and they needed someone to help out. I had to give it a lot of thought as my mum was dying on the ward, but I am a practical person and I thought ‘My mum’s sent me here’ and I thought my mum wanted me to go there.”

Seven years later and Gail has remained at Ward 35, tackling the unique challenges on what she describes as a ‘beast’ of a ward, and her own private challenges after battling back from breast cancer. In 2020, after shielding, Gail was one of the first at the Trust to receive the Covid-19 vaccination before returning to work on Ward 35 for her final days.

“I’ve done the walk down the corridor today for one last time. I went for a Costa with the girls. I’m going to miss this place, the team, my colleagues, the bosses and the patients. I love the patients. But Blackpool Victoria will always be in my heart.

“This place saved my life as a youngster and it’s our town hospital. I have never wanted to work anywhere else. And I’ve been fortunate to be able to work here and I could have gone on longer. It’s just my husband wants me to have a life now with him.”

Speaking about Gail’s impact on Ward 35 and the Trust as a whole, Gabby Webster, Clinical Matron in the Specialist Surgery Directorate said: “Gail is irreplaceable. She is so passionate about the patients, but even more so about the staff.

“Gail’s compassion, empathy and support of the staff goes a long way.

“She only came here temporarily seven years ago and she never left, so I’ve got to be grateful for that.”