Chris Tucker of the Home First team has received a Going the Extra Mile Award after being nominated by colleagues on Ward 23. 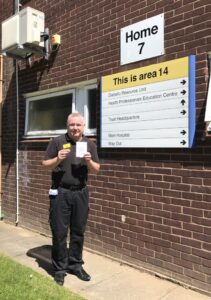 Chris was praised for “always going the extra mile and beyond to make sure patients are discharged safely to their home and in time. He is just good at his work. Thank you Chris, from Ward 23. You are well appreciated.”
The Home First team takes patients home and assesses their functional ability in their own environment, to make sure they are safe to remain at home.
The team also provides any equipment the patient may need around the home such as a bed lever or grab rail, organises packages of care to help with personal care, meal prep and medications as identified by therapists during their visits.
Chris describes the team as ‘a one stop shop to make sure patients are safe at home following their discharge from the ward.’
He said: “I was so pleased to receive this card. Getting patients safely back home from hospital and working with a great team is a privilege and having my work recognised by my hard working colleges makes it even more rewarding.” 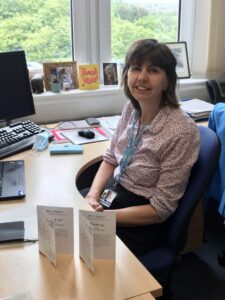 Meanwhile, Consultant Obstetrician and Gynaecologist, Dr Elizabeth Haslett, has received two Going The Extra Mile awards.
She was nominated by two colleagues. One nomination said that: “Miss Haslett is an approachable and hardworking Obstetrician who provides fantastic care to the women she cares for.”
The second nomination said: “One of our colleagues was off sick. Her clinic would have needed reducing on short notice and only covered by a registrar. Dr Haslett was in theatre (which are scarce sessions now) but opted to come and cover the clinic while it was clinically safe for the patients in theatre to be done by another consultant.”
Dr Haslett said: “Receiving these two Going the Extra Mile awards was very unexpected. Many people are under a lot of stress at the moment and it’s very nice to receive a thank you. Now more than ever, it’s important that we offer flexibility and think outside the box.”