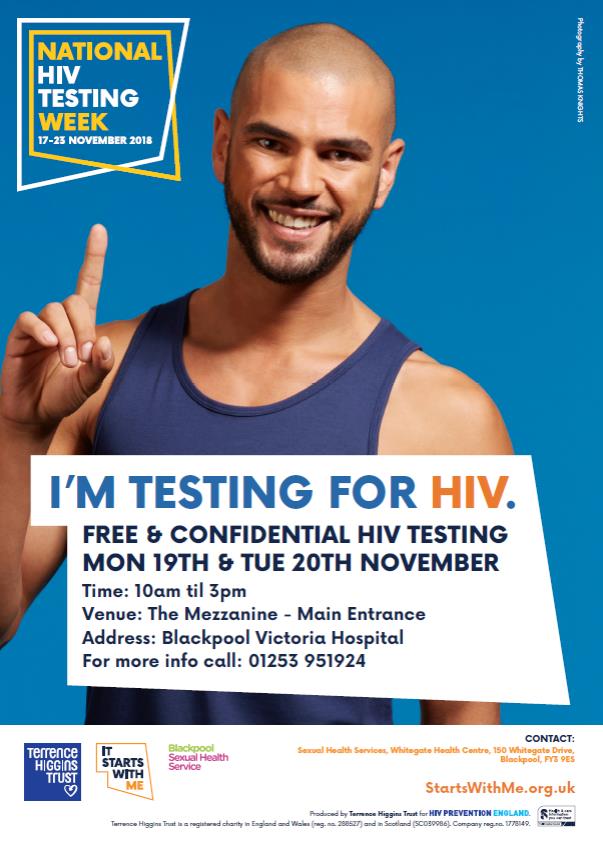 The finger prick test will be conducted in a private room and the results revealed in only 60 seconds.

Clinical Care Coordinator, Shane Faulkner, who is part of the team arranging the event, said: “The sooner you find out whether you have HIV, the better it is for your health. If you have HIV for a long time without knowing, it can damage your body and even shorten your life. Test negative and you end any worries or doubt.”

It’s a good idea to test at least once a year (or more often if you have unprotected sex with more than one partner).

Shane added: “The over 50s age group has seen a growth in contracting the virus.HIV causes little in the way of symptoms and is often overlooked in the differential diagnosis of unwell patients. Testing is good for all of us. Most people get HIV from someone who don’t realise they have it. If more people test and get the medication they need we could dramatically cut the numbers who get HIV in the future.”

Testing is available on the mezzanine at Blackpool Victoria Hospital on Monday 19 and Tuesday 20 November 10am – 3pm.  The team will also be testing at the Flying Handbag, Queen Street, Blackpool from 5.00-9.00pm on Monday 19 and Thursday 22 November.