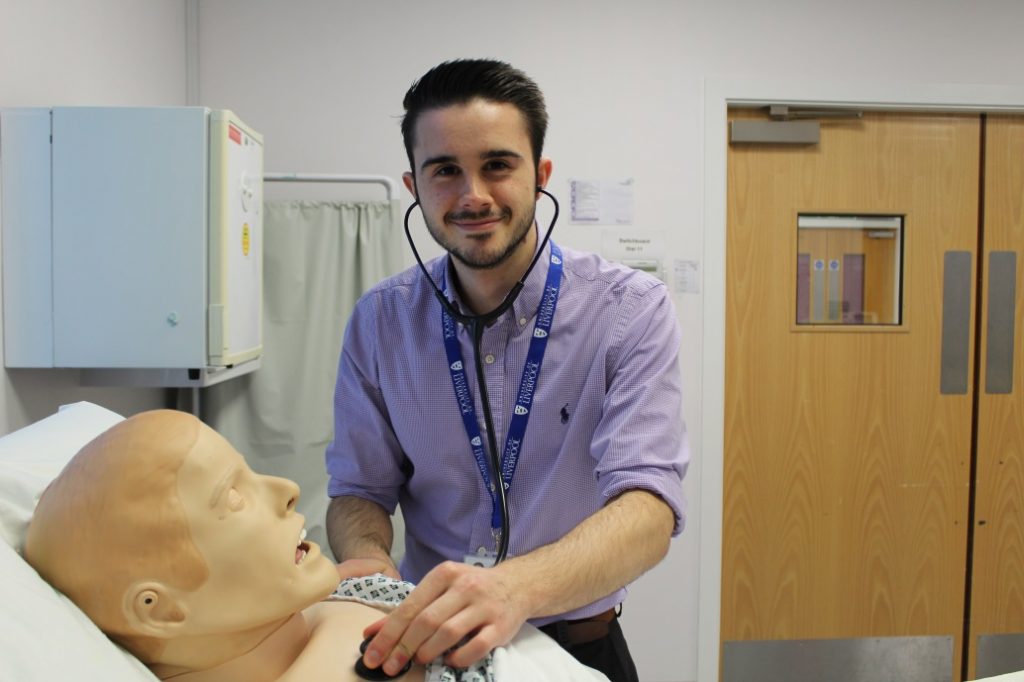 A FIFTH year medical student is passing on his experience to younger trainees.

George Bramham has been a student at Blackpool Teaching Hospitals for the last two years and in his time at the Trust has developed a keen interest in the use of simulation in education.

George said: “With the help of the team, I have designed simulation scenarios for the 4th year medical students.

“I have loved using simulation to learn through my 4th and 5th year, and I wanted to transfer my learning and enjoyment to the younger students so they become more confident.

“Simulation is such a useful way to learn educationally and we are one of the only Trusts where 5th year students utilise the centre due to the hospital able to facilitate.

“It is great preparation for the 4th year students with their exams, and also to become more familiar with simulation as they progress to their 5th year and beyond.

“I got involved with developing the scenarios following the bedside teaching sessions with a small group of younger students. I asked for feedback about what they would want in terms of simulation.

“I designed four different scenarios which are emergency focused in acute medical emergencies and cardiac arrests. This helps the students with medicine management.

“It is important to get as much exposure as possible because simulation can be quite daunting as simulation is about practicing scary situations in a controlled environment”.

In November last year, George set up the scenarios between two groups of students which included debrief. It was supported by Simulation Lead Mark Hatch who designed scenarios to George’s brief using the North West simulation template.

George said: “I observed the students in their scenarios to provide constructive feedback and it was nice to be on the other side of the glass!

“The training is very realistic to deal with the management of shock and when to seek help.

“The feedback has been very positive following the first run of scenarios. The students felt they built confidence and helped practice for exams.

“I attended the faculty development course which helped my understanding of education and debrief, and now I have a qualification to show, which I can use in the North West.

“I really want to run scenarios with more students and get involved with scenarios which include students working with nurses, allied health professionals and consultants, also medical emergency focused.

“More people should use the fantastic tools of simulation at the hospital; it is a great way of learning and isn’t used enough”.

George is the first medical student to take part in the faculty development course and is considering staying at Blackpool purely for the simulation!