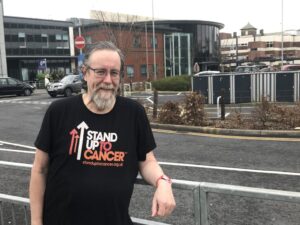 People living in Blackpool, Fylde and Wyre have been urged to talk more openly about cancer in an effort to reduce the number of people dying from the disease.

The Let’s Talk Cancer campaign aims to support people to talk about their experiences of cancer to increase the number of people being screened and to improve care. It also encourages healthcare professionals to communicate more clearly on what can be seen as a sensitive subject.

The campaign will be officially launched as part of World Cancer Day, the annual day set aside to raise awareness and improve education worldwide, on Tuesday 4 February 2020.

Dr Adam Janjua, a Fleetwood GP who is also the cancer lead for the Fylde Coast NHS, said: “The word cancer can create fear and negative emotions. By talking about it we identify these feelings and it helps to put things into perspective.

“Through the campaign we are also trying to encourage health professionals to be more open with patients, exploring their concerns and offering clear information.

“Talking and understanding creates action. We are hoping that making cancer part of everyday conversations will support people to attend appointments for cancer screening and tests or hospital reviews for suspected cancer.

“The earlier cancer is detected, the quicker it can be treated and the longer term survival rates are better. The more we talk about cancer, the sooner we can act.”

Cancer survivor Steve Tingle welcomed the launch of the campaign, saying anything that makes people more open to discussing the disease and to ultimately get checked when they needed to was a good thing.

The 67-year-old from Thornton said: “I had bowel cancer but because it was picked up so early and removed within two months, we only actually had it confirmed as cancer two weeks after they took it out.

“The bowel cancer screening I took when I turned 60 really did save my life. It showed an anomaly and that was enough for investigations to happen and ultimately for the surgery to be carried out.

“I think it’s great the NHS is launching this campaign on the Fylde Coast. I have spent lots of time since the disease talking with other cancer sufferers and survivors. It’s so important to reduce that fear and make people feel more comfortable talking about this disease.”

Dr Janjua added: “By talking about cancer today you will create a ripple effect and you may save a life. You may remind someone to go for a screening or encourage them to address any worrying symptoms. Let’s talk, think and act on cancer.”