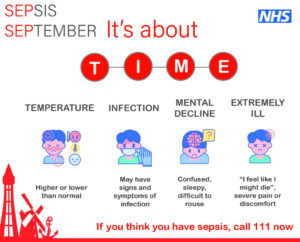 Doctors and other clinicians across Blackpool, Fylde and Wyre have teamed up to tackle sepsis – one of the UK’s biggest killers.

Sepsis causes 52,000 deaths every year, with a quarter of a million people being diagnosed with the illness in 2017. A quarter of all survivors will have some life-changing effects from having sepsis.

And clinicians on the Fylde Coast have launched Sepsis September to raise awareness of the disease so it can be spotted sooner and treated more quickly.

Dr Ben Butler-Reid, a Blackpool GP and clinical director for NHS Blackpool and NHS Fylde and Wyre Clinical Commissioning Groups (CCGs), said: “We urge as many people as possible to get involved with this campaign.

“Sepsis is a life-threatening reaction to an infection. It happens when your immune system overreacts to an infection and starts to damage your body’s own tissues and organs.

“Some people are more likely to get an infection that could lead to sepsis, including babies under 1, particularly if they’re born early (premature), people over 75 and people with diabetes.

“Throughout September, we will be educating people about the symptoms of sepsis and what to do if you think you or someone you know might have sepsis.

“Call 111 if you think you or someone you know has sepsis.

The key to saving lives is TIME. For every hour treatment is delayed, the risk of death increases by as much as eight per cent.

TIME is a memory aid, developed by Sepsis Alliance, to help people remember the signs and symptoms of sepsis. TIME stands for:

It highlights the urgent need for medical treatment when these symptoms are present.

Throughout Sepsis September, awareness-raising events will take place at Blackpool Victoria Hospital and in GP practices. For more information or to find out when events are taking place, visit www.fyldecoastccgs.nhs.uk or www.bfwh.nhs.uk

As part of the campaign members of the public are invited to a free screening of a popular British film called Starfish based on the life of sepsis survivor Tom Ray, a young father whose life was changed drastically after developing the condition.

The critically acclaimed film is being shown at Blackpool’s Regent Cinema on Wednesday, September 11 at 6pm raising awareness of the recognition and management of sepsis across the area.

Tom and his wife Nicola will be present and be sharing their story of resilience and survival in a special question and answer session after the film.

Tickets can be booked online at: http://www.regentcinemablackpool.co.uk/