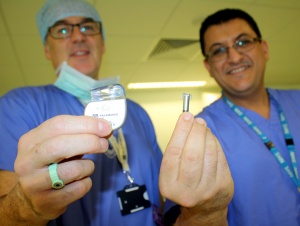 Heart surgeons on the Fylde coast are among the first in the region to perform a “landmark’’ operation to implant a new form of cardiac pacemaker.

Carol Railton, 87, from St Annes received the new “leadless’’ pacemaker this week after the first operation of its type at the Lancashire Cardiac Centre based at Blackpool Victoria Hospital.

The new pacemaker, a tenth of the size of current devices, is the smallest in the world and is tucked inside the heart itself via a catheter.

As it is self-contained, it does away with wiring into the heart needed by normal pacemakers. And, as the surgery involved with the new device is minimal, it should reduce the danger of infections developing, while at the same time improving the speed of the patient’s recovery.

Consultant Cardiologist, Dr Grahame Goode, who performed the operation with Dr Khalid Abozguia, said: “This is a major step forward for the centre and for patients across the Fylde coast.

“Once we know the patient is suitable to have this type of pacemaker fitted there are huge benefits for them as the leadless technology means it is minimally invasive and carries fewer complications. Cosmetically there will be no scars and as the pacemaker is implanted there will be no visible lump in the chest. 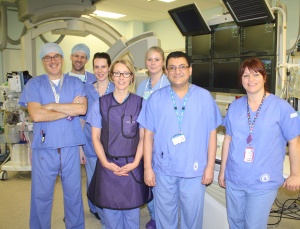 “The simpler operation takes less time and patients can get back to normal in just two to three days, compared with six weeks currently.’’

The device could be suitable for around a third of pacemaker operations.

Dr Goode said: “This is a big step forward in patient treatment and a milestone for the Lancashire Cardiac Centre.’’

Mrs Railton said: “It feels incredible to know I am the first person locally to have this operation and I feel very privileged.

“I am very grateful to everyone here for what they have done for me and I can’t thank them enough for their support.’’

Pacemakers regulate the heart’s rhythm and are implanted in more than 40,000 patients in England each year. Although they have been getting smaller in recent years – the first to be implanted, in the 1950s, were the size of a small tin of shoe polish – they are still too big to be placed inside the heart itself and so are put in the upper chest.

This involves a wound up to 2in across. The pacemaker is then connected to the heart via wires, but these can be pulled out of place or snap over time. In contrast, the new device is small enough to be ferried into the heart via a catheter that is passed up through the groin and because it is placed in the heart, there are no wires to be attached.