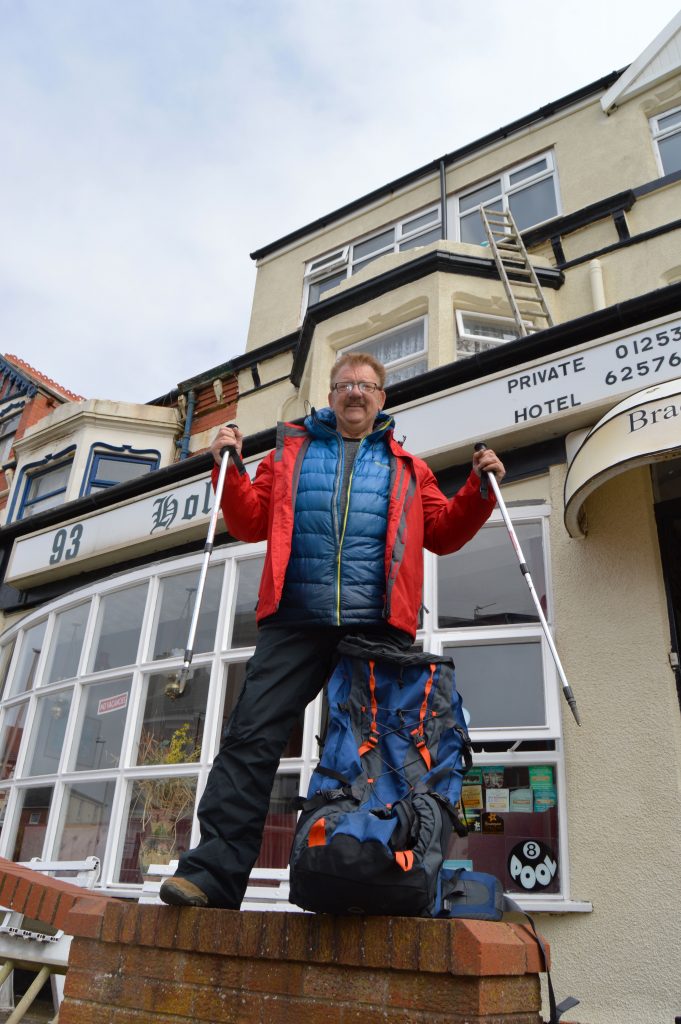 Mike outside his B&B in his hiking gear

A Blackpool hotelier has thanked staff at Blackpool Victoria Hospital for helping him fulfil a dream of hiking up the world’s largest mountain.

Mike Foster, who owns the Holm-Lea on Lord Street, has climbed up to Mount Everest’s Base Camp despite suffering horrific injuries after a 15 feet fall five years ago that left him fearing he may never walk again.

The 66-year-old said: “Following a fall from a ladder in 2013, I broke my arm, elbow, leg and hip and was confined to a wheelchair.

“Consultants said they couldn’t guarantee a full recovery or that I would even be able to keep my left leg.

“But thanks to a determined team at Blackpool Victoria Hospital, I kept pressure off my hip for eight months then worked hard at my exercises to get my strength back.”

Since his teenage years, Mike had dreamt of climbing Everest and decided that realising that dream was his focus for getting better.

He said: “I looked into doing it and realised I had to be in good shape to complete the three week trip.

“After some hard work with my physios helping me to believe in myself to get me walking again, I decided to build my core and leg strength by intense training three times a week at my local gym.”

Reaching Base Camp was never guaranteed however, as climbers can have adverse effects to the altitude and can go no further. Mike was also the oldest person in his travelling group.

But with the help of a young Sherpa, Peba, Mike reached Base Camp on his birthday, March 18.

He said: “It was absolutely unbelievable. Here I was at the highest point in the world on my birthday, realising a dream that seemed impossible. I can never top that.”

And because Peba the Sherpa helped Mike realise his dream, Mike is helping Peba realise his by sponsoring him to go to college in Katmandu.

Physiotherapy Team Leader, Andrew McCarthy, said: “Mr Foster came to us in a wheelchair following his fall in 2012.

“His recovery is amazing. He has worked hard with the physios, following instructions and advice. He has obviously got out what he put in order to be able to make the trip up Everest. Fantastic.”

Mike added: “If it hadn’t been for the support, both mentally and physically, I gained from the NHS, I may never have walked again, never mind climbed Everest. I can never thank them enough.”