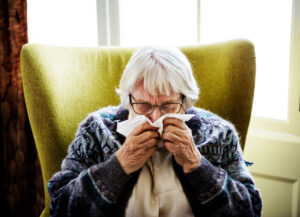 Flu (influenza) is an infection of the nose, throat and lungs and there’s more of it about this year.

At first, flu may seem like a common cold with a runny nose, sneezing and sore throat. But while colds usually develop slowly, flu tends to come on suddenly – and while a cold can be miserable, you usually feel much worse with flu.

Symptoms of flu can include:

The symptoms are similar for children, but they can also get pain in their ear and appear less active.

Flu will often get better on its own, but it can make some people seriously ill. It’s important to get the flu vaccine if you’re advised to which is free for everyone over 50 and wide range of other people.

If you have flu, there are some things you can do to help get better more quickly:

Antibiotics are not recommended for flu because they will not relieve your symptoms or speed up your recovery.

There more information about flu, how to treat it and when to be concerned on the NHS England website.

Myth #1: The flu vaccination gives you the flu

While your body does mount an immune response to the flu shot, it’s not because you’re sick with the flu. The flu shot does not give anyone the flu.

The influenza vaccine is made with an inactivated (or killed) form of the flu virus. Inactivated vaccines, which have been in use as a vaccine technology for decades, are made when scientists remove the pathogenic element of the virus (the part that makes you sick) and replicate this inactivated virus in a lab.

When a person receives the flu shot, they are given a small dose of this inactivated virus. The vaccine can’t make you sick, but it does trigger a mild immune response. The immune response is essential because this process allows your body to form antibodies to the flu.

Some people won’t experience any side effects at all from this immune response, but others may experience minor, short-lived side effects in response to the vaccine. While some of these side effects (such as fever) may be similar to symptoms of the flu, this isn’t the same as an infection with the flu.

Myth #2: The side effects from the shot are worse than the flu

Yes, there are common side effects to the flu shot. But not everyone experiences them, and they’re usually minor and short-lived.

Common side effects of the flu shot include:

You may experience one or more of these side effects after getting your flu shot, but they usually only last for a day or two. The flu can last for around a week, but symptoms such as cough and fatigue can last long after you’ve recovered from the flu.