Blackpool Teaching Hospital Trust’s newly appointed Divisional Director of Nursing for Tertiary, David Kay, will have extra reason to celebrate the NHS’ 73rd birthday as it will be a reminder of his family’s long association with healthcare on the Fylde coast. 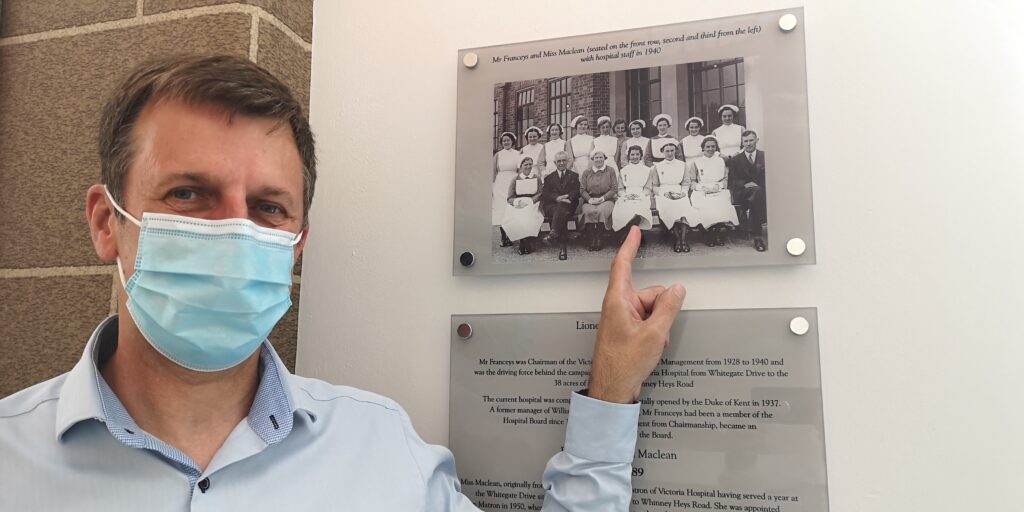 David Kay pointing to his grandmother, Roma Lomax, who worked at the hospital

David, who is a proud Blackpool born and bred local, is the third generation from his family to be employed by the NHS, a rich history which stretches all the way back to 1937, when his grandmother, Roma Lomax, began her career as a nurse at Blackpool Victoria Hospital.

A photograph of Roma and her hospital colleagues from the 1930s features prominently on wall of the main corridor at Blackpool Victoria today, a constant reminder and a reassuring presence as David continues the family legacy of caring for the people of Blackpool.

“I feel quite proud to be also working in the same organisation all these years afterwards and following in my grandmother’s footsteps,” David said.

“She was really passionate about her job, she really enjoyed her job and she was absolutely spotless when she came in to work. Her picture on the wall there, in my opinion she is the most well-dressed nurse.

“She was one of the first nurses to be recruited into the hospital. It is great to see her when I walk past, I walk past her most days. When I’m having a particularly bad day, which most have had in these challenging times, I just take a break, walk past her, have a quick look at her and think that’s all the motivation I need and then I carry on. It is quite comforting and reassuring.”

David’s grandmother retired from the NHS in 1975 and would see her daughter, David’s mum, go on to work in the NHS as a ward clerk and various support. David’s sister was given much persuasion from Roma to work in the NHS and is now a nurse within a GP’s practice. Roma was also there to see David himself qualify as a nurse.

He said: “She would have been really proud, she was still alive when I started my nurse training which I am really pleased about. She was really encouraging. I don’t think she was surprised. Male nurses are quite common now in the NHS, but back in her days probably not.

“When I qualified in 2000 she gave me a book on Florence Nightingale, an original book, which she has signed and I have still got to this day. When I read that book it has got things like Infection Prevention Control with rats running about and all sorts. It just reminds you how much we have moved on.”

David’s focus now is to tackle the huge challenges within the newly formed Tertiary division, an area of the hospital which is home to some of the most poorly patients, but also the ground-breaking work of services such as cardiology, cardiac theatres, cardiothoracic, haematology and oncology, as well as the artificial eye service.

Maybe soon we will see the next generation of David’s family joining the family business and making their own mark on providing safe and effective healthcare to the Blackpool communities.

“I’ve got a 16-year-old son and I’m not sure what he wants to do but I would really encourage him to work for Blackpool Teaching Hospitals,” David says with a smile. “Maybe one day his children can look up and see my picture up somewhere in the hospital, that would be interesting.”