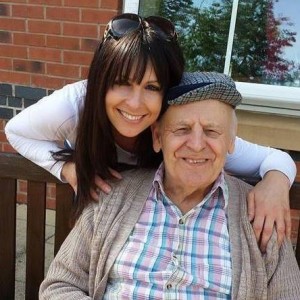 Lisa with her dad John

When Lisa Donoghue’s dad was dying there was one person in particular who helped to bring her back from the brink of despair.

Lorraine Tymon went far beyond her role as an End of Life Educator for Blackpool Teaching Hospitals, giving comfort, reassurance and love to Lisa and her family.

Lisa was so grateful to her “angel” Lorraine that she nominated her for one of Radio Wave’s annual Heroes in the Community Awards.

Lorraine was surprised and delighted to be presented with the Blackpool radio station’s Public Service Award at Viva nightclub in the resort on November 19.

Lisa and Lorraine had known each other more than 20 years ago but had lost touch. By chance, they were reunited at Blackpool Victoria Hospital when Lisa’s dad John, who had Alzheimer’s Disease, was gravely ill.

Lisa explained: “I nominated the gorgeous Lorraine as a thank you for coming back into my life at a time when I needed her but didn’t know it.

“When I was in hospital with my dad on November 17 last year, my dad’s doctor brought two lovely ladies to see me from the end of life team. I think it was to tell me to go home, which I wasn’t going to do!

“By a twist of fate, one of those ladies was Lorraine, she had called on the wrong ward, happened to bump into my dad’s doctor who brought her into dad’s room to help.

“I said ‘I know you’ and from that moment on Lorraine was there for me. She checked in on us throughout the day, made dad comfortable and gave me her number when she finished work.

“People say let’s keep in touch, let’s go for that coffee, and half the time they don’t mean it, but Lorraine meant it when she said ‘ring me if you need me’. Later that night I did!

“I texted Lorraine and she was there in my dad’s room in about 10 minutes.

“When my dad passed away in my arms 10 minutes later, Lorraine was holding his hand.

“The fact that she remembered my dad with such fondness made it more special for her to be there.

“For anyone who has gone through the same, it is a very difficult time but this is something I will always have with my dad and I would not have been anywhere else.

“Lorraine knew what to say, what not to say and supported me in an amazing way.

“Lorraine won a deserved award and I am so proud of her. She helped me and dad; she didn’t need to but she did. She meant it when she said ‘if you need me I’m here’. 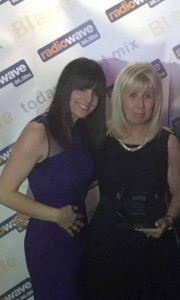 Lisa with Lorraine at the awards ceremony

Lorraine said: “A doctor at the hospital asked me to see a patient and I couldn’t believe it when I entered the room and saw Lisa with her dad.

“The nurses said Lisa had been with her dad for days and would not leave his side.

“I will never forget what Lisa said to me then. She said an angel had been sent to her.

“I sat with her and explained some things to her. I had to see another patient but when I had finished work I called back to see her and said if there was anything she needed, just to call me.

“At 10pm that night Lisa texted me and said ‘I need you’. I went straight away.

“When Lisa’s dad died she didn’t want to leave him so I talked her through everything.

“There was a lovely health care assistant on the ward who said she had a brother who worked in the mortuary and that she would ask him personally to look after Lisa’s dad. This reassured Lisa because she knew he would be well looked after.”

Lorraine was characteristically modest about winning her award and said: “It’s just what anyone would do”.

She added: “I didn’t think I would win. I just did what anyone would do.

It was a great honour to be down to the last three.

“It was just amazing that someone had thought that much of me and had nominated me.

“There were so many special people who had been nominated for awards.

“I dragged Lisa onto the stage with me. It was so emotional.

“I took my son Jordan (14), my daughter Nicola (30), my partner Steve Green who is a porter at Blackpool Victoria Hospital, my mum Patricia Almond, my auntie Annette Stevens, my brother Pete Tymon and my friend Vanessa Cornall. Unfortunately my other sons Craig (32) and Ben (27) couldn’t go.

“Everyone was crying. It made me feel very humble.

“It was just an amazing experience – it’s something I will treasure for the rest of my life.”