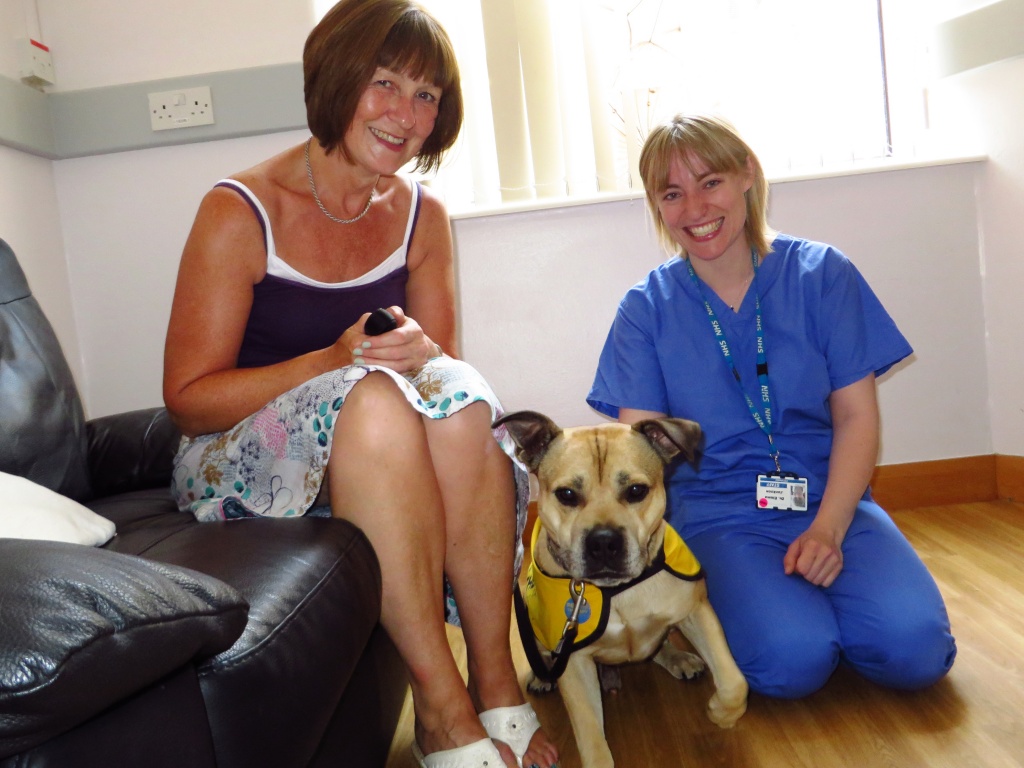 A friendly and placid ‘therapy dog’ is taking part in a project aimed at reducing delirium in hospital patients.

Dandy the Pets As Therapy (PAT) dog is visiting the High Dependency Unit (HDU) at Blackpool Victoria Hospital on a regular basis to help reduce patients’ stress which medics hope will lead to a reduction in delirium and confusion.

So far the patients have loved meeting Dandy and the results of his calming presence are promising.

Part Staffordshire bull terrier and part bull mastiff, Dandy is incredibly laid back. He was originally a rescue dog from the Wolfwood animal sanctuary near Lancaster until Diane Ogden took him on as a therapy dog.

Emma Jackson, a doctor on HDU; Consultant, Jason Cupitt and Sister Catherine Ashton, came up with the idea to see if pet therapy would help their patients.

Emma said: “I thought it would be a good idea to see if Dandy could come as pets can help with anxiety.

“PAT dogs are used a lot in areas such as psychiatric wards, paediatrics and rehabilitation. We wanted to look specifically at delirium. Our aim is to see if it could help to manage stress levels and anxiety for our patients.

“We will be doing some basic observations during and after Dandy’s visits. We’ll be asking patients how they felt and if it improved communication with nursing staff. We’ll also be looking to see if it can help to improve the morale of nursing staff.

“We’ll be observing ‘level two’ patients – that’s patients who have been quite sick and are waiting to go onto a ward. It’s for patients who are not on a ventilator and don’t need organ support.” 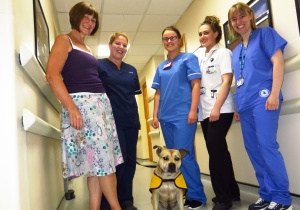 Emma and the team on HDU will use their findings to improve patient care on the unit.

Emma added: “Long-term we would like to see if we can reduce delirium. Delirium is common in very sick patients.

“It has a big impact on the length of stay and, ultimately, on mortality.

“It is something we don’t have a huge understanding of. It’s early days but we are hoping it will reduce anxiety.”

Diane Ogden, who is a psychiatric nurse from Preston, said: “Dandy has worked in hospitals before.

“He’s very chilled.  He’s so good with people. He’s very calm around them. He sits by the patient’s bedside and doesn’t pester them. Emma called me to see if we could help. If it works it will be fantastic.”

PAT dogs are part of a national charity so the service is free.

Diane added: “If it’s successful, hopefully they will be able to roll it out to other parts of the country.

“Animals can have a very therapeutic effect on people. They can help to reduce high blood pressure and help with emotional problems.

“Emma and the consultant felt that Dandy’s presence might help to stabilise their patients when coming out of Critical Care.”