An evening of popular classical music is being held to remember a well-known maestro on the Fylde Coast, and to help raise money for local dementia care.

The concert, to be held on 20th March at Lowther Pavilion, will pay tribute to Fylde Sinfonia’s former conductor John Simpson, who led the orchestra for almost 30 years before passing the baton to the present conductor, Peter Buckley.

John, who was Head of Music at King Edward VII School for 23 years, sadly died in 2009 after suffering Dementia. In his memory all proceeds from the night will go to Blue Skies’ Peace of Mind dementia appeal, which aims to enhance the care given to patients with dementia across Blackpool, Fylde and Wyre. 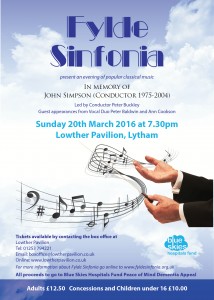 John’s son, David, of Ansdell, said: “My sister Jessica and I are extremely touched by Fylde Sinfonia’s decision to hold a concert in memory of our Dad. He dedicated much of his life to music and had many friends in Fylde Sinfonia over the 29 years he was the conductor.

“We are delighted money raised from the concert will go to Blue Skies Hospitals Fund to help people who are living with Dementia – this is a very fitting tribute to our Dad.

“Peter was a great friend of Dad’s and he has put together a programme of music he would have loved. We hope to see lots of people there to enjoy this wonderful evening and raise lots of money for charity.”

Peter Buckley said: “John was well known and well loved at Fylde Sinfonia, where he played the Viola before he ultimately became conductor in the 1970s.

“It is with great pleasure that we are able to put on this music evening in celebration of his memory and for a cause we know he would have been very supportive of.

“We hope as many people as possible turn up to support Fylde Sinfonia in memory of our good friend John, and to support dementia care in our area through Blue Skies’ Peace of Mind appeal.”

Compere on the night will be the Chairman of Blue Skies’ Charitable Funds Committee, Doug Garrett.

He said: “We are looking forward to this concert, which will be a treat for all tastes in music and help to raise money for our very important dementia appeal.

“Thanks to Peter for his help in organising this event, to our vocalists at Classic Sound and to the Lowther Pavilion for allowing us to put on this spectacular evening in such a fitting venue.”

Tickets are on sale now from the Lowther Pavilion Box Office on 01253 794221. Adults £12.50, children, concessions and Friends of Lowther Pavilion £10. Discounts are available for group bookings.