Three staff on Ward 2 at Clifton Hospital have been nominated for a number of Going the Extra Mile awards for their hard work and commitment to their patients.

Sister Tina Welsh was nominated for her hard work thinking of themed activity days and encouraging everyone to take part in a recent Jerusalema dance challenge,

Tina put posters on the walls and helped staff practise dancing on the wards, and the dance itself even saw staff come in on their day off.

Sophie Pendleton, Ward 2 Manager, said: “People felt a little deflated after Christmas, so we decided that each month we would hold a themed day, and it was Tina’s idea to hold the challenge.”

Then Healthcare Assistant Annie Monaghan was praised for constantly entertaining the patients. Recently she helped a patient known for being glamorous to put in rollers and some makeup. 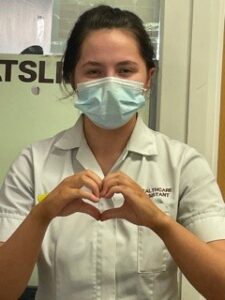 Sophie Pendleton said: “Annie’s a beautiful person, really fantastic. It was all about helping this lady get back to how she would be at home.”

Finally, Ward Clerk Maggie Koziol was nominated “for being the glue that has held the ward together in tough times, and for constantly being positive.”

Sophie said: “She’s the absolute backbone of the ward, and it just wouldn’t function without her.

“Maggie has helped out with so much, planning our cake wars competition and setting up the room. She took part in the dance challenge and will be visiting to help with our Easter bonnet parade.

“I’m so lucky to have a team like this behind me and would like to thank them all for their hard work and commitment.” 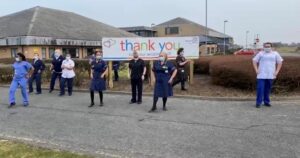