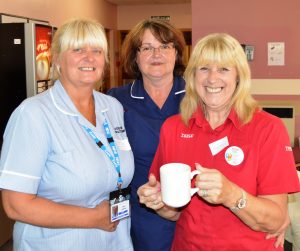 Carers, patients and staff at Clifton Hospital have welcomed a new café set up to provide support and companionship.

Hospital staff launched the new Carers’ Café in Lytham on Tuesday, September 27, and carers of people living with dementia gave it the seal of approval.

Peter Lyttle from St Annes, who has vascular dementia, said patients and carers can feel isolated and he was delighted that the café offered an opportunity to socialise and pick up information.

Peter, who is retired and previously worked as a manager for Northern Foods, said: “When I was first diagnosed last year I was very down.

“Having dementia can feel very isolating.

“I went to a similar café organised by the Alzheimer’s Society and it saved my life.

“It’s great that the café at Clifton has been organised and to have another place to meet people. We are all on the same journey but at different stages.

“At the café you can meet different people and it’s something to look forward to.

“I live on my own so I am caring for myself. It’s good to keep doing things for yourself and to speak for yourself. I like having a choice. 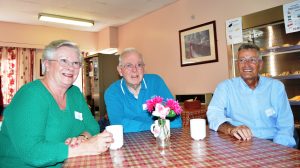 Peter Lyttle (right) with Pauline and Jack Davies at the first Carers’ Café at Clifton Hospital.

“The staff are absolutely brilliant at Clifton – they do everything they can to help you. I’ve been coming to the hospital for 18 years with other conditions.

“The staff are very passionate about what they do. They genuinely care – it’s not just a job to them – it’s a way of life.”

Pauline and Jack Davies from St Annes, who have been married for nearly 20 years, were also at the launch of the café.

Jack, a retired chartered accountant, was diagnosed with Alzheimer’s disease two years ago and Pauline, who worked in catering and retired recently, is his carer.

Pauline said: “It’s nice to go to the café and meet people.

“Friends don’t always want to know. It’s just the two of us most of the time. We do everything together.

“We also go to the Alzheimer’s society café at The Glendower Hotel and Booths near Clifton Hospital also has a café.”

Jack added: “It’s good to get out because it’s usually just me and Pauline.

“I have enjoyed coming here to the café.”

The café was the brainchild of Linda Broadbent, the manager of Ward 1 at Clifton Hospital.

Linda explained: “We already do a lot for our patients but we wanted to do more for carers.

“We could see that there were people out there in the community who needed help and support.

“I thought, ‘why don’t we set up a little café’. It’s mainly for carers of people living with dementia but anybody can come. We won’t turn anyone away. 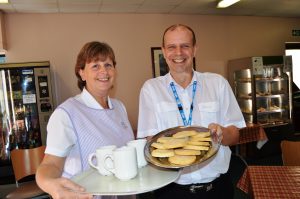 “One woman came to see us and she was crying and needed support. We gave her a brew and had a chat. It’s good to be able to help people. We are trying to make life easier for carers.

“A lot of people don’t understand dementia. We know what makes people feel better and how to support them.”

Volunteers from the Alzheimer’s Society were present at the launch of the cafe to provide information and support.

Lynn Sumner, Tesco’s community champion, was also at the event as the company has supported Clifton Hospital with fundraising activities on many occasions.

The Carers’ Café will take place on the last Tuesday of every month from 2pm to 4pm. The events will be held in Clifton Hospital’s canteen and refreshments will be served.