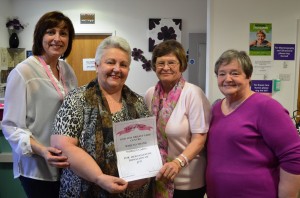 A charity evening which included a magician and quizzes has raised £625 for breast cancer care at Blackpool Victoria Hospital.

The evening, held at the Highfield Social Club in Blackpool last month, was organised by Shirley Carte and Marguerite Smith in aid of the Breast Cancer Unit through Blue Skies Hospitals Fund and the Haemochromatosis Society.

They raised a total of £1,250 which has been split between the two charities, and Shirley paid a visit to Blackpool Vic to present her money to breast care volunteers Ruth Boardman and Rena Shanahan.

Shirley, 68, is a supporter of the Unit where she was treated for breast cancer after her diagnosis on New Year’s Eve in 2013. She underwent a lumpectomy, and had chemotherapy and radiation therapy until her treatment ended in October 2014.

It was the second time she battled cancer, after doctors discovered she had bowel cancer in 2011.

She said: “I just wanted to give something back after the wonderful care and support I received. You’re so well looked after on the Unit and the staff continue to look after you even after you’re treatment’s finished.

“The Queen couldn’t have had better treatment!”

Shirley, who lives in Blackpool, remains close with the breast care team at the hospital, and attends the monthly Breast Cancer Support Group meetings.

She said: “It still helps me today by keeping me focused. It’s easy to get down and depressed when you’re faced with something like cancer and unless you’ve had it, you don’t know. The doctors and nurses here are so supportive and it helps you through.”

They said: “Shirley is always helping out, whether it’s donating cakes and meat for our fundraisers, attending the support group and now this fantastic donation from the charity night.

“We are so grateful for this ongoing support, and we’re looking forward to using this money to further enhance the care patients at the Breast Care Unit receive.”

The money raised at the charity evening will be put towards buying a Faxitron machine, which will allow surgeons to examine skin and tissue removed from the body in the operating theatre, reducing the waiting time between the operation and diagnosis.