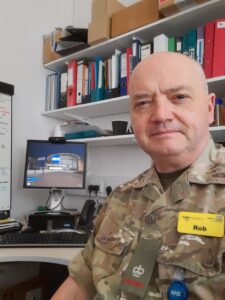 Rob Instrell in his office at Blackpool Teaching Hospitals

This Saturday is Armed Forces Day, a national opportunity to show support for the men and women who make up the armed forces community.

Blackpool Teaching Hospitals has long been proud of its association with the armed forces. Last year BTH was named as one of just a handful of NHS organisations across the country to receive a Gold award for its support.

Ahead of the weekend, it is Reserves Day which falls on 22 June as a chance to recognise Reserve Forces.

Today the Trust’s own Major Rob Instrell has spoken of his experiences and encouraged others to take the plunge in a career in the Reserves.

Rob, who along with being member of the Reserves for almost two decades, is also the Clinical Lead for Critical Care Outreach and Resuscitation Services at BTH.

Rob, known as Major Rob Instrell VR QARANC, is a Staff Officer with the Medical Operational Support Group. He has been in the Reserves for around 19 years and comes from a family with a tradition of military service.

He explained: “A life that combines both military and civilian careers offers significant benefits. After passing selection, I attended the Royal Military Academy at Sandhurst and then joined my Regiment as a Troop Commander, quickly stepping up on promotion to Captain as the Unit Adjutant; the officer responsible for discipline and order.

“An operational tour as Trauma Team Leader in Iraq provided a wealth of opportunity to practice my clinical and leadership skills in a very different and demanding set of conditions. On operations you have to understand risk, make rapid decisions, plan for every contingency and be prepared constantly for the unexpected. You learn to practice your skills in austere conditions with often limited resources and above all understand that the team is everything; indeed being a good follower is just as important as being an effective leader.

“Above all, we are soldiers first and as such undergo some significant preparation for deployed operations and maintain those essential skills to conduct ourselves as part of a fighting force.”

Rob’s regiment at the time, 335 Medical Evacuation Regiment, is a Nationally Recruited Unit. These specialist units have a smaller minimum commitment of around 19 days a year, with the local units such as 208 Field Hospital requiring more. As a member of the Command Team he was expected to give significantly more time and his next role as Clinical Lead of the Unit required many days of work on developing strategy and doctrine and developing the clinical training of the MOD’s specialist ground evacuation unit.

Rob explained that what helped enormously to achieve the correct balance was support from the NHS, including support from BTH.