In the run up to the NHS’ 73rd birthday celebrations, Weekly News will be featuring more of the special people who go the extra mile for patients and their colleagues.

Today we’re taking a look at six colleagues who have been chosen for one of the Trust’s Going The Extra Mile awards and look at the reasons why they were nominated. 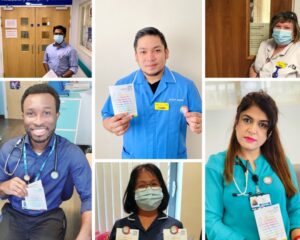 She was nominated by the Cardiac Theatre Team because she “is very organised, works under extreme pressure, is very proactive and good at communicating.” Her colleagues said she “ensures the smooth transfer and handover of patients, despite time constrains, and all this hard work is truly appreciated by the whole theatre team.”

Next is SN Xander Baybayan, who works in Ward 24 at Blackpool Victoria Hospital and was nominated by Matron Maria Jennings. SN Xander was nominated for “taking charge on two consecutive nights on Ward 24. Patients were well looked after, the ward was calm and well organised, and SN Xander is a credit to the team.”

Meanwhile, Dr Alex Maliekal of the Ambulatory Emergency Care Unit (AECU), Ward 18, was nominated for the night staff who said: “Thank you for working so hard and keeping the ward running smoothly. You’re always approachable and happy to answer any of our questions.”

Dr David Nwinee of Gastro, Ward 12, was nominated by his colleagues for “having the most fantastic, upbeat attitude, for always offering to help, for being so understanding, and for being so flexible and caring.”

Sister Maria Demegillo was nominated for an award by her colleagues in Ward 37 at the Lancashire Cardiac Centre for “stepping up and taking over the role of full time Ward Manager”.

The nomination said: “She has brought a breath of fresh air to management style and the running of the ward. Her skills and implementation of ideas have proven innovative and effective. She is so respected and highly thought of by all her staff.”

Finally, Dr Nayla Ishaq who works in Ward 26 was nominated by her colleagues for her care for patients. Her colleagues said: “She is so kind and takes the time to speak to them and explain everything. She is also brilliant at liaising with patients’ relatives and nothing seems to ever be too much trouble.”