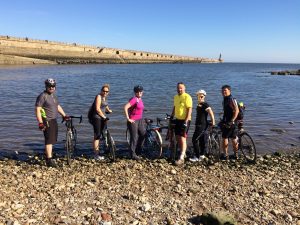 A team of cyclists from Blackpool Victoria Hospital’s Cardiothoracic department has completed the tougher-than-expected challenge of a coast to coast bike ride in the name of charity.

Led by surgeons Nidal Bittar and Andrew Duncan, the team of five and two support drivers set off from Whitehaven on the west coast a little later than planned at 12.30pm on Friday, September 16.

From there, after a small diversion, they reached the Whinlatter Pass in the Lake District which Mr Bittar described as the ‘hill from hell’.

“After that, it was a struggle,” he added.

“The hill up to Castlerigg Stone Circle near Keswick was steep, and we thought that was the worst it would get. But that was just the beginning!”

After Keswick, the group, which also included Donna Stringer, Lisa Twist and Victoria Holt as well as drivers Alfie Matibag and Norfrey Almira, had to navigate more diversions which added more miles to their original challenge.

The team reached its first hotel at 10pm, and after a good night’s rest and a breakfast members set off for the most arduous part of their three-day challenge.

Mr Bittar said: “That was the day we took Bradley Wiggins’s route to Consett on the recommendation of the hotel owner. He said it was quite straight forward…instead it was a day of 40 miles of long hill climbs and exhilarating freewheeling, and then up the hillsides again.  But the weather was very kind to us and the scenery and views were magnificent and well worth the effort.”

The group reached Consett at about 8pm after a total of 60 miles of cycling for a hospitable welcome at the YMCA hostel, where they spent the night.

Their final day took them through Newcastle on a mostly downhill stretch to their destination in Whitley Bay on the east coast, where they arrived at about 2.30pm on Sunday, September 18.

Mr Duncan said: “This was very much a team effort between those who took part in the cycle, and Alfie and Norfrey, who were our support throughout the ride.

“Our sincere thanks must also go to everyone who supported us by fundraising before the event. Particular mention must go to the people who organised the cake bake and raffle at Blackpool Victoria Hospital, especially Jacqui Higgins, Amanda Sharpe, Collettee Remmett, Cathy Malpass and Anne Rampley.

“We also need to say a huge thank you to everyone who has donated towards our charities.”

The group is still £1,000 off its £6,000 target, so is inviting people to make a donation now the challenge is complete.

Donations are being taken online at www.mydonate.bt.com/fundraisers/lancashirecardiaccentre.