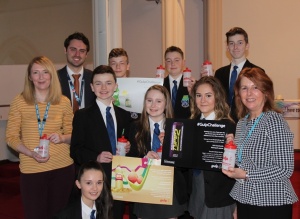 Students across Blackpool are being encouraged to ditch sugary pop for healthy swaps.

Running for the second year, Blackpool Council’s Give up Loving Pop (Gulp) campaign is encouraging Blackpool students to take part in a 21 day challenge to give up sugary drinks with the hope that they will switch to healthier drinks such as low fat milk for good.

Figures released in 2015 from Public Health England (PHE) showed that children aged between 4-18 were getting 30% of their sugar intake from sugary drinks.

As a result of this, 40% of the town’s 10 and 11 year olds are classed as overweight according to the National Child Measurement Programme (NCMP).

The challenge, which runs from March 10-31, was relaunched at St Mary’s Catholic Academy, Blackpool and will be followed by more ‘Gulp’ roadshow information sessions in other local academies.

As a result, many students are looking to take on the 21 day challenge to Give up Loving Pop including Katie Keelan, who said: “I didn’t realise how much sugar was in the different drinks. I will definitely be drinking less in the future.”

Jacob Sainsbury was surprised at the facts, commenting: “It was weird to see how many sugar cubes are in a bottle of fizzy drink. I just didn’t know. I am going to take up the challenge.”

Students were tasked with binning high sugar drinks such as energy drinks, fizzy pop and fruit juices, and drink water, lower fat milks and no added sugar drinks instead.

Simon Mitchell, St Mary’s PSHE Co-ordinator, said:  “We wanted our students to rethink how much sugar they are consuming in drinks. Sugary drinks offer no nutritional value and aren’t necessary for a healthy diet. In fact they can lead to poor health. Today has been very informative and we are delighted that there has been such a positive response from students.”

“Responses also indicated that there was a greater understanding of the health risk. To show my support this year I will also be taking up the Gulp challenge this month.”

To encourage students and others to come on board there’s also a chance to win Sandcastle Waterpark passes.

To take part Blackpool Council is asking young people to take a ‘healthy selfie’ and put a photo of themselves drinking a healthy drink on Instagram using #GulpChallenge. Then fill in a pledge to Give Up Loving Pop online at www.blackpool.gov.uk/Gulp.

The competition is open to under 18s only.