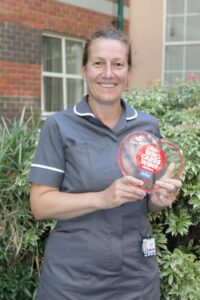 A nurse at Blackpool Teaching Hospitals has been named Nurse of the Year at the star-studded Who Cares Wins ceremony aired on Channel 4 at the weekend.

Jackie Brunton, BTH’s Lead Nurse for End of Life and Bereavement Care, was one of just three people shortlisted for the category, and she attended a ceremony in London where she was presented her award by TV presenter Kate Garraway.

She was chosen after being nominated by Sue Ayrton of Blackpool, whose father Neville died from Covid at Blackpool Victoria Hospital early in the pandemic. Jackie supported Sue when visiting ceased to see her dad Neville, 73 via an iPhone in his last days when visiting restrictions were introduced across the country.

The work done by Jackie and the team during the pandemic laid the foundations for the Trust’s full-time Swan bereavement support service and establishing the Swan Suite.

During the ceremony, Jackie, who attended with her daughter Jess, was sat at a table with high profile figures including DJ and TV star Chris Evans, and Amanda Pritchard, the CEO of NHS England.

Jackie’s work was highlighted in a special video shot at BTH during the event. She praised the work of everyone in her team and at the Trust throughout the last 18 months and said to receive the award was ‘humbling’ and she was ‘extremely proud to be part of the incredible family we have at Blackpool.’

Jackie said: “I was so shocked to win, and I’m still speechless now. I just feel incredibly humbled to hear the stories of all the other recipients and nominees and the way so many people have gone above and beyond to support patients during this difficult time. Our teams across the trust worked together to support one another doing the very best they could and all should be proud.

“Kate Garraway presented my award which was astounding because I’ve followed her story with her husband for some time, we can all relate to her and seeing the video featuring Blackpool Victoria Hospital and Sue’s story was really lovely.”

Sue added: ““I am so proud of Jackie wining the award for Best Nurse, she thoroughly deserves it for all her and her team’s hard work over the past 18 months.”

Trish Armstrong-Child, Chief Executive of Blackpool Teaching Hospitals NHS Foundation Trust, said: “It was so moving to see Jackie’s story and hear how she and the team had supported a family in need at such a difficult time.

“This award is a fantastic achievement for Jackie personally, but also a great reflection of the work being done across the Trust by all our hard-working colleagues.”

During the event Jackie and her daughter mingled with the stars, meeting figures including Piers Morgan – who even spoke to Jackie’s husband on the phone to tell him Jackie had won, David Beckham and Rod Stewart. Also in attendance were Prime Minister Boris Johnson and Prince William.

Jackie added: “This award was not just about me – it’s dedicated to Sue and her family, in memory of all those who have died and their loved ones and to all the incredible team at Blackpool Teaching Hospitals who have shown such dedication in supporting patients and each other.

“It’s great to be recognised like this but it’s for everyone.” 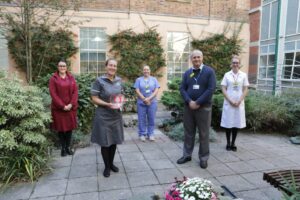