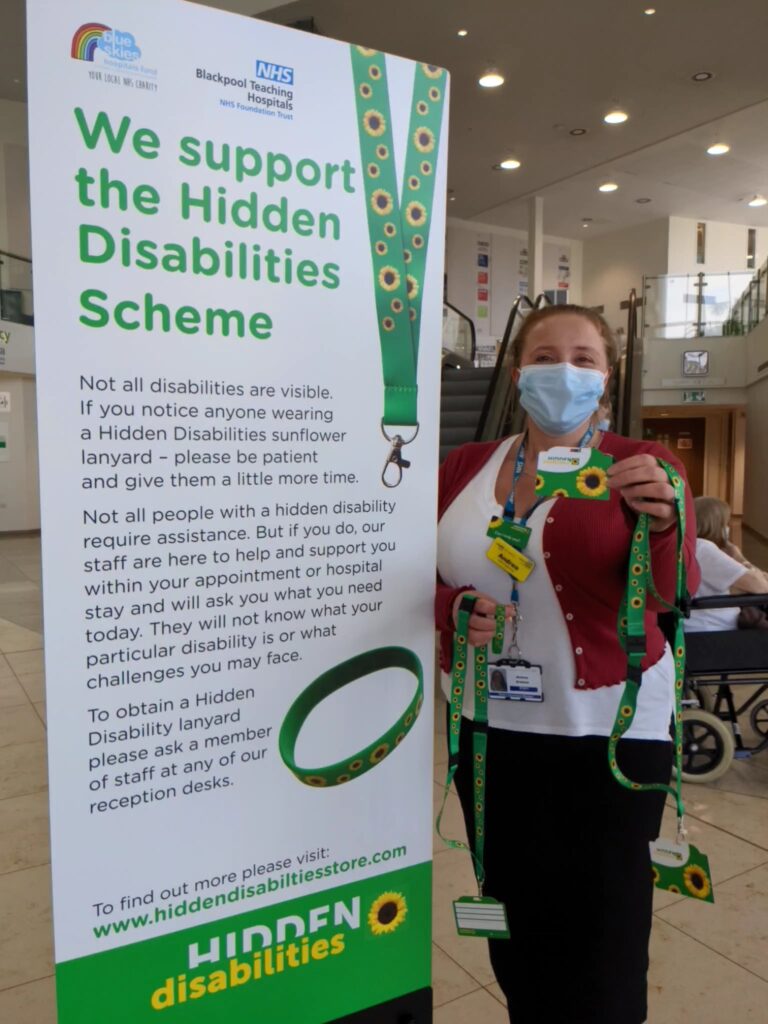 Blackpool Teaching Hospitals’ commitment to the nationally recognised Hidden Disabilities scheme has received a boost thanks to a donation from the Blue Skies charity.

The Trust signed-up to the ‘Sunflower Scheme’ last summer, one of the first NHS organisations to give their official backing to a project which started at Gatwick Airport in 2016, and has since been recognised at other airports and most major supermarkets.

Blackpool had trialled a similar scheme in the Emergency Department thanks to Health Practitioner Sophie Jones, who recognised that those with dementia were not being flagged on wards. The Trust has now adopted the wider Hidden Disabilities scheme which is easily recognisable due to the sunflowers and bright yellow and green branding.

In addition to additional provision of badges, lanyards and wristbands, the scheme now has a visible presence in the main entrance at Blackpool Victoria and Clifton Hospital, letting visitors know that the Trust supports those with hidden disabilities.

Speaking about the funding boost from Blue Skies, Andrea Graham, Patient & Family Experience Manager said: “As part of our ongoing commitment to the Hidden Disabilities ‘Sunflower Scheme’ the Patient Experience Team have recently been successful in a Blue Skies funding bid for extra resources, such as lanyards, wristbands, pin badges, ‘can I help you?’ staff badges etc.  The Team were also successful in gaining funding for two Hidden Disabilities banners to be displayed in the Main Entrances of Blackpool Victoria Hospital and Clifton Hospital, these banners will help cement our commitment to the campaign across the Trust.

“The new signage not only shows our patients and visitors that we are here to help, but also acts as a reminder to staff that we have made a commitment to the campaign and are here to help you.”

Any visitors to Blackpool Teaching Hospitals who would like a Hidden Disabilities badge, lanyard or wristband can ask for one at main reception.