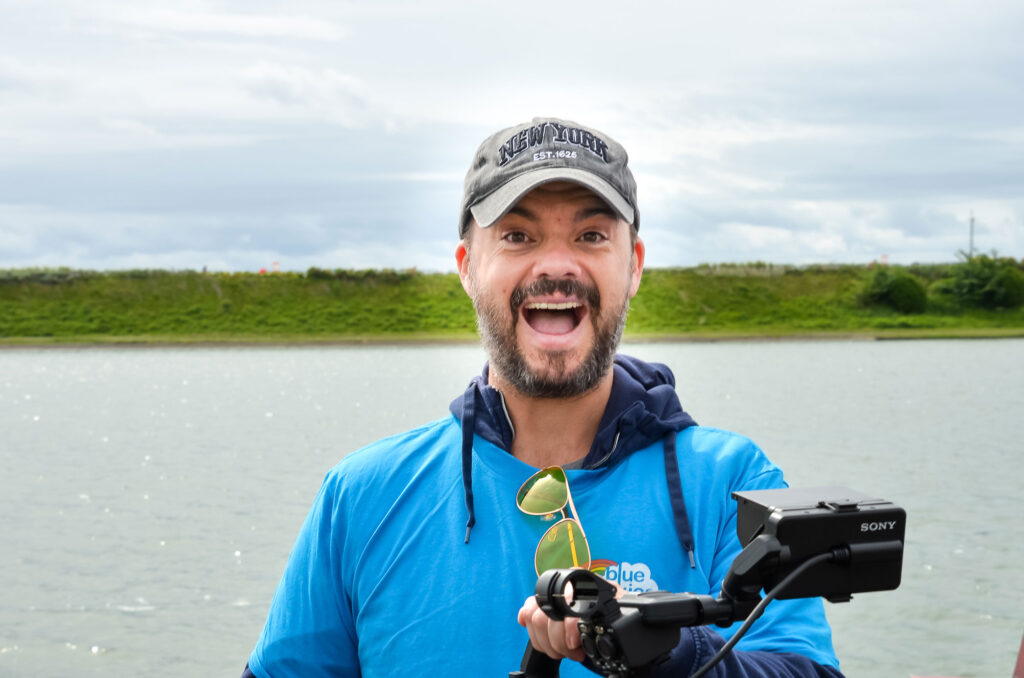 We would like to introduce you to our new Patron, Barney Harwood.
You may recognise Barney for his 25+ years working within the BBC on shows such as Prank Patrol, Bear behaving badly and Blue Peter. Barney joined us in May and has be an amazing asset to the charity ever since!

Our communications officer recently had a catch up with Barney, to see what Blue Skies means to him.

What do you love about Blue Skies?

I love that blue skies are so close to the hospital, as in, it’s in the hospital. You’ve got a great access to hear lots of different stories. You get to hear from patients, staff and everybody who goes through the doors, about lots of courses that you can then work out what you’re going to do to raise money  . You’re in the best position to actively do stuff that matters and helps.
I love that you do events to involve the public and that you’ve got people who work for Blue Skies who are great at drumming up the interest and the fact you don’t stop until you’ve achieved your goal.

Why do you think NHS charities are important?

If someone doesn’t feel well, who do you call? The NHS, it’s a trusted source and a national treasure and should be treated as such. It’s crucial we have it. The NHS is something that is so important, so if you have a charity connected to that that is so well placed and can raise money for people that really need it. Most people have got an experience of the NHS, most people have gone through something that has either been life changing, it’s not just things like care, people might have lost somebody, and the NHS still cares for people afterwards, they have programmes in place to help families and they are across the board a wonderful thing. So, I think any charity that is involved with that and can raise money to help keep them going, is a great thing.

Why did you agree to be patron?

Firstly, Kila offered me £50,000 … I’m kidding! it’s important to me because of personal history, I’ve been very poorly on a couple of occasions and the NHS have gotten me through that.  The care I received from the NHS was just above and beyond it was a different class of care. The doctors and nurses at BTH in particular are super human beings, so if I can do anything to help those people, who have got long hours, and don’t necessarily get to spend time with their own families because they are looking after other people’s families, anything that I can do to help them , not just based on my own experiences and my family and friends , I would jump at the chance to do something in any way I can to help them continue to do what they do.

What surprised you about Blue Skies?

I was surprised by what money can be raised for! I had never heard of a little heart pump. Blue Skies can raise money for things as intricate as the world’s smallest heart pump or they might hear a story in the hospital that gets them going and gets their creative juices flowing about how they might be able to help somebody. I didn’t know that Blue Skies had that much control over what they raised money for and I like that!  I like the idea that you can have stories that are based on individual families or cases which will impact your future decisions. you are buying equipment as well which I didn’t expect!  I didn’t expect bobby to be as good at dancing either! that was quite a surprise.

What have you learnt from Blue Skies?

I’ve learnt it’s not just about raising money and sticking it in a big pot, there’s a lot of local community events that you do and I don’t think people realise that they can come in and speak to you whenever they want and tell you about their stories or about raising money and donating. If they want to donate money to a particular course, you’ve got all the staff there that you need to put it in the right places.  I didn’t know bobby bear was named after bobby ball who was a hero of mine, so that worked out well.  What have I learnt though…?  I’ve learnt that you will do anything, it takes to raise money for a course. It seems like there’s no limit to what you do. I don’t believe for a second that any of you would accept any kind of limitation on anything. You’d say let’s try our best and see what we can do.  you are a relentless charity team, who do what you can in lots of individual ways, and I didn’t know that’s how it worked. You are very officiant; I’ve learnt how officiant charities and fundraising can be by being involved with you.

What do you see in your future with Blue Skies?

– I would love to do something with Blue Skies down the road where they are recognised as THE charity for the NHS. Because it’s run by a team of people who are passionate and genuinely care about who they are raising money for. I would love for Blue Skies to be recognised as one of the biggest charities that the NHS has because it’s not about raising the money and giving it to somebody, it’s about why you’re raising money, who it’s for, and what difference it’s making. The bigger you get the more you do, the more of a household name you become, that would be an amazing thing to see and people to go with Blue Skies because they know, they’ll get the job done.