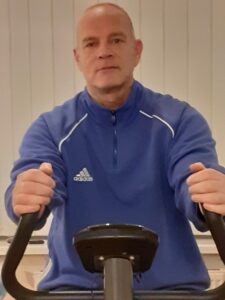 A BLACKPOOL man has praised local NHS staff after having a life-threatening tumour removed.

Steven Hackwood, a 57-year-old civil servant, was shocked when he was found to have the tumour last year. He had no symptoms and only went to the doctors after believing he had suffered a minor injury while exercising.

He said: “I was doing some press ups one night on some press up bars that I found and I felt a bit tender for a few days after.

“I booked an appointment with my GP, Dr Waqass Yousaf, a few days later and wasn’t going to go to be honest as the pain had reduced a bit but I’m so glad I did as he sent me to the hospital for a precautionary scan.

“I didn’t really think anything of it but while I was there they scanned my kidney which showed there was a seven to eight centimetre tumour there.

“I was shocked as I had so symptoms of any illness at all and that scan literally saved my life as if I had left it much longer it may have been too late.‘’

Steven went on to have his tumour removed and was back at home recovering the day later.

He said: “My GP and the staff at Blackpool Victoria Hospital were fantastic. My Consultant, Mr Islam, was amazing and I can’t thank him enough for what he did.’’

Mr Islam, a Consultant Urologist, said: “We performed an operation called Laparoscopic radical nephrectomy and I am delighted to see Steven is recovering well.’’