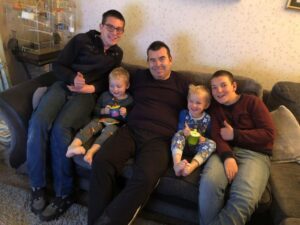 Stephen Betteridge back at home with children from left: Nathan 14, Declan, 12 and twins, Logan and Kieran aged 4

A Blackpool father of four has praised staff at Blackpool Victoria Hospital after beating Coronavirus.

Taxi driver Stephen Betteridge, 45, showed no symptoms of the virus until returning home from his working day and finding he could not breathe.

He said: “Around two weeks ago I became very breathless and phoned up by doctors. They advised me to ring NHS 111 and I arrived at the Emergency Department in an ambulance.

“Initially I didn’t think I had the virus and was really concerned about my health.

“I was tested for the virus a few days later which came back as positive and I was admitted onto a ward and put on oxygen and nebulisers.

“I also had bad sickness and diarrhoea which were symptoms not commonly associated with the virus.

“I was so ill I really didn’t think I would be able to improve my health and pull through this. I was regularly Facetiming my four boys and wife at home who were all very concerned about me.

“The care at the hospital was absolutely fantastic. The staff working on wards 2 and 8 were brilliant and I’m so grateful to them.

“It was a really scary time and so hard not being able to see my family too.”

Stephen was discharged recently from hospital, just in time for his son, Nathan’s 14th birthday.

“It was so nice to be home for my son’s birthday,” Stephen added.

“He was so pleased to have his dad home and we made sure he had a really good day.

“I am now at home recovering and receiving care in the community. My family are all isolating and they have been so supportive through all this.

“It was such as scary time for all of us and I cannot stress enough how important it is to follow the Government’s advice to stay inside and to listen to the symptoms being described with the virus.”