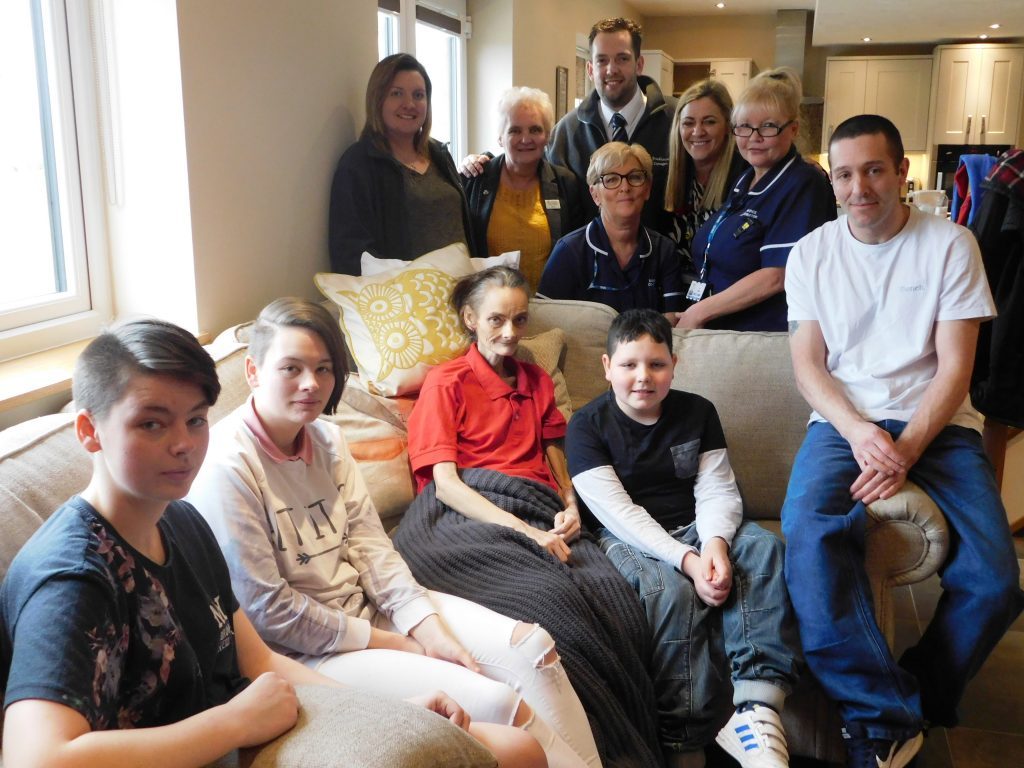 Caring staff at Blackpool Victoria Hospital pulled out all the stops to ensure a terminally ill patient enjoyed one last holiday in her final days.

Forty-four year old Ann Thomson, originally from Edinburgh, but living in Blackpool, was given only four weeks to live following a short battle with cancer.

It was her dream to have one last holiday together with her family and Discharge Coordinators, Shelagh Rooney and Jo Barks and Communications Officer Alma Stewart, sprang into action to make sure the wish was granted.

Within hours, it was arranged that Ann and her family could spend a complimentary five days in the five star Brickhouse Cottages in Hambleton from February 11.

Ann’s partner, Shane Jackson, 32, praised all those who helped organise the holiday, saying: “It was more than we could have asked for. It was unbelievable what they did for us.

“It was more than we ever expected. The space, the hot tub, the peaceful surroundings really helped us reconnect and spend time together at such a time and we made some lovely memories.”

Shelagh said: “The family told me that they would love to be able to have one last break away to make some memories with their four children; Ryan, Stacey, Aleisha and Cameron; while they still could. I knew I had to help.”

Sheelagh put a call into the Communications office to try and get a story into the local newspaper. Luckily, Alma, a former Pontin’s Bluecoat, answered the call and within an hour the family had been offered the break thanks to fellow entertainer Adam Spedding, a close friend of the family that owns Brickhouse Cottages.

Alma said: “I am a member of a Facebook group made up of former Pontin’s staff and I knew they would be able to help. It’s more like a family than a group of former staff. The admin of the Facebook group, Jeannie Crowhurst, secured an overnight stay at the Grand, Blackpool and Adam came up trumps with the five day break at Hambleton.”

Adam had asked Vicki Murray, Brickhouse Cottages’ Account and Marketing manager, if the firm could help the family and they were booked in within 24 hours.

But Shelagh and Jo didn’t stop there. They managed to get a Domino’s pizza donated and delivered to their house on the discharge day.

With the help of Jo, they managed to stock the cottage with food and toiletries and new swimwear for the week from their own money, Jackson’s Florists delivered flowers in time for Valentine’s Day, Lazy Days donated a family photo shoot, The Shovels pub gave a meal for five, Blackpool Zoo and the Sandcastle have donated passes. Even a taxi ride to and from the resort was donated.

Vicki said: “It was nice to be able to offer a holiday in such sad circumstances and to have given that gift to someone who was so deserving of this time together. It was the right thing to do.”

Jo said: “With the support of our boss Ian Ellwood, we were able to devote the time to make this break a memorable one. Brickhouse turned out to be the perfect place for this break as it is so tranquil, not too far away and has equipment such as hoists and is wheelchair friendly.

“It is such a shame we can’t do this for every patient, but it was a privilege to be able to help the family at such a sad time.”

Shelagh added: “Our heartfelt thanks must go to everyone that helped pull this off.

“It’s such a nice feeling to know that there are so many kind people who came together to support and realise a family’s last wish.”