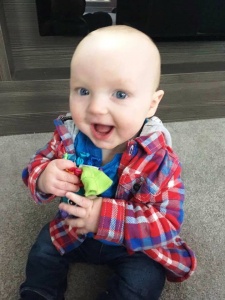 Casey is clearly delighted to be reunited with his teddy bear

A baby has been reunited with his favourite toy thanks to the kindness of two Health Care Assistants at Blackpool Victoria Hospital on the Fylde coast.

When she returned home she had a phone call from the hospital to say they had found the toy and would return it to her address.

Toy and boy were reunited thanks to the detective work of HCAs Amanda Nuttall and Nicola Hansford who not only found the much loved teddy but made a special journey to deliver it personally to Sally.

Nicola said: “We found the toy in the outpatients department and after a bit of detective work found out who it belonged to and wanted to make sure we got it back to its owner as soon as possible. As soon as we knew it was Sally we gave her a ring and I drove round to Sally’s house after work and dropped it off personally.’’

Sally said she was “touched’’ by the gesture. 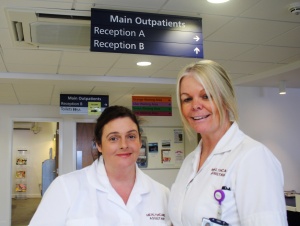 She said: “It is a toy that has real sentimental value to the family as it was one of the first ever toys I bought for my daughter and it was passed down to Casey.

“I got a call from one of the nurses to tell me that they found it and there was no need to come back to the hospital because they would drop it off at my house.

“I was beyond touched to be honest. So many people would have just left it. They were so sweet and went above and beyond and I am so grateful for what they did.’’

Director of Nursing and Quality at the Trust, Marie Thompson, said: “This is a lovely story and it is great to see members of staff praised so highly for their kind actions.

“Nicola and Amanda really did go above and beyond to help put a smile back on someone’s face and I am really proud of them.’’