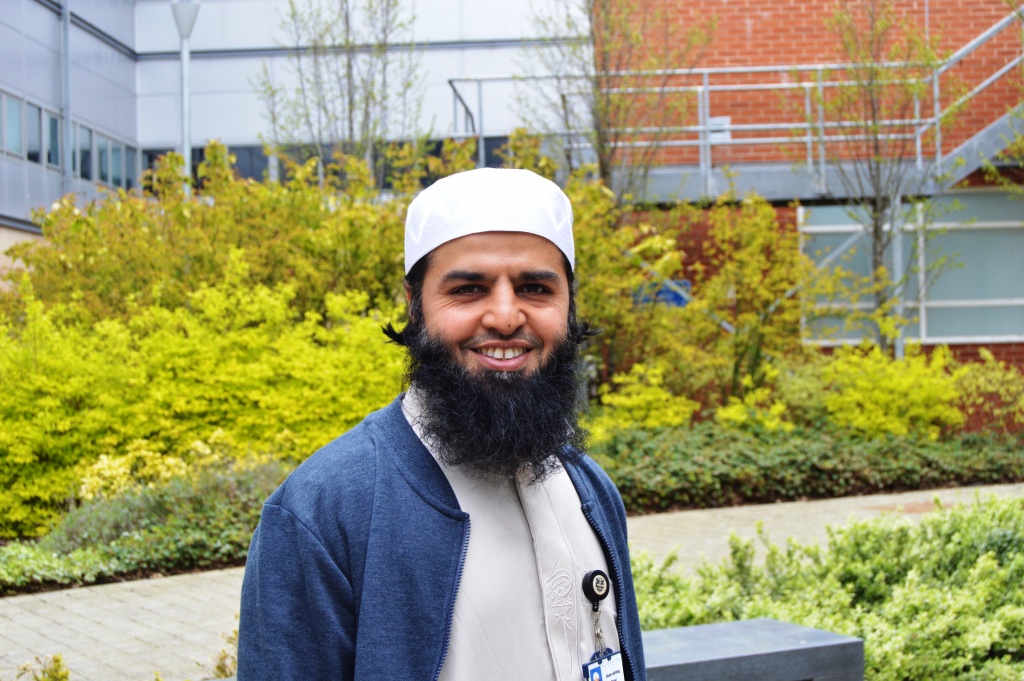 Imam and hospital chaplain, Ashfaq Patel, says he has much to be grateful for.

In his work for Blackpool Teaching Hospitals NHS Foundation Trust he helps patients, families and staff but the organisation has also helped him and his family.

“It’s a two-way thing,” says Ashfaq who helps patients to cope with bereavement and has experienced loss himself.

“My wife and I lost a baby in the seventh month of pregnancy. Our baby was diagnosed with cystic hygroma (a cyst or group of cysts). The care we received was second to none. I give, but I have also received. I am very grateful for the care. We have also had three girls born at Blackpool Victoria Hospital.”

Ashfaq has travelled all over the world and has visited many countries including France, Spain, Norway, Sweden, Israel, Morocco, India and Africa for work experience. Now, at the age of 43, he has settled in Blackpool with his wife and three daughters.

Ashfaq’s work as an Imam at Blackpool Mosque and chaplain at Blackpool Victoria Hospital encompasses many areas of life. He recently spoke at a service in the centre of Blackpool in memory of the victims of the recent terrorist attack near the Palace of Westminster in London.

He says this was a moving event which brought the entire community together. People from many different faiths took part in the open-air service. 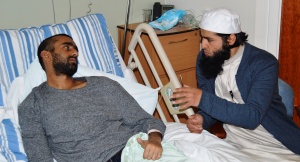 Ashfaq with a young patient

“It’s important for people of different faiths to understand each other – even if they don’t necessarily agree on everything,” says Ashfaq. “We should respect each other’s beliefs and ways of life.

“I think it’s important to learn from the person, rather than just listening to what the media says. People can make up their own minds.

“I have experienced racist insults and Islamophobia. I think it’s because some people have misconceptions about Muslims. I try to turn that around.”

Originally from Preston, Ashfaq went to a Muslim school in West Yorkshire where he memorised the Quran and studied Islamic theology to become an Imam. He graduated in 1999 and decided to visit Gujarat in India where his ancestors lived.

“My grandfather came to England in 1961,” he says. “At the age of 25, it was quite important for me to see where my roots were. I travelled for a year on the Indian sub-continent in 2000.

“The reason I travelled for a year was that I knew I would be returning to the UK to work with a diverse community. I wanted to see the diversity in the country that my grandparents came from. It really opened my eyes. I saw the poverty, the richness and the different ways of living. I saw god’s earth. It was just amazing. I also became ill and was hospitalised at one point.

“I met many good people; people who inspired me. I learned a lot from them. They were from all walks of life.”

Ashfaq returned to Preston in 2001 and went to work as an Imam at a mosque at Cheetham Hill in Manchester.

“It was a big community with a mixture of people,” says Ashfaq. “There was gang culture so I did a lot of work with young people on gangs and drugs.

“I brought them into the mosque and helped them to be more conscious of god. They had a lot of peer pressure so I tried to help them to get out of the gang culture. It was very rewarding work.”

Ashfaq worked at the mosque for a year and then taught at a madrasa (a school attached to a mosque), in Preston. 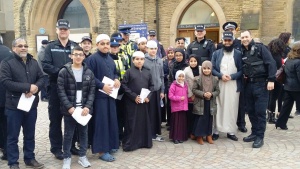 Ashfaq at a community event following terrorist attacks in London

In 2002 the late Dr Abdul Ghafoor Bhaloch – a consultant physician in the care of the elderly at Blackpool Victoria Hospital – and ENT consultant, Dr Ifty Khan, offered him work at the Central Mosque in Blackpool. At that time the Mosque was on Rigby Road and in 2004 it moved to Revoe Street.

Ashfaq said: “Dr Bhaloch encouraged me to volunteer at the hospital Chaplaincy department. I came one day a week for two to three hours. Now I am paid for three hours a week. I am usually here more often than that and can be called in to the hospital in the middle of the night if someone has passed away.”

Ashfaq works closely with the other chaplaincy team members to provide pastoral, spiritual and religious care to patients, their relatives and the staff.

He said: “I can mediate between family members and medical staff if ethical issues arise.

“Ethical issues can sometimes come about when a person is at the end of life and families are raising issues in the care provided. I speak to the families and the doctors to try to find a resolution.

“Issues can also arise during times like Ramadan (a Muslim month of fasting that takes place in the ninth month of the Islamic calendar which is ten days earlier each year. This year Ramadan starts on May 26/27).

“A lot of medical staff will be fasting from dawn to sunset each day for a month.

“Muslims believe that fasting encourages people to have empathy for those who don’t have anything.”

During Ramadan people have a light meal at dawn at approximately 2am and a normal meal after sunset. They say a prayer called the Taraweeh that lasts for an hour and a half which ends around 12.30am.They then have a pre-dawn meal and offer the first prayer of the day at 3am. By the time people get to sleep it’s about 3.30am.

“It’s a spiritual detox,” says Ashfaq. “The main reason for doing it is that people become more aware of god. During hunger a person can suppress his or her desires, which will then make them more aware of god.”

One of the main aspects of Ashfaq’s work as a hospital chaplain is bereavement care. In particular, he helps parents who are coping with baby loss either during or after child birth. He is also there to share happy occasions such as offering the Islamic blessing rituals for a new-born child.

He explains: “I work with the Trust’s Bereavement Office, registrars, mortuary staff and coroners to try to ensure the early release of the deceased. It’s a great thing that we have all these services under one roof.

“Muslims bury their dead as soon as possible. For example, if a person has passed away at around 7am, the family is sometimes able to have the funeral at 2pm on the same day, thanks to the services we have here.

“Sometimes I can be called at 1am or 2am so that a person can be buried that same day. I see it as my duty to do this.

“The families really appreciate this service – the reason for this is that they are able to mourn their loved one properly once they have been buried. Families outside Blackpool really envy the service that is provided here.

“Blackpool Teaching Hospitals is a great place to work. It is full of friendly people and there is a great community spirit around the hospital.”